When Russia first invaded Ukraine in February 2022, most people, including military experts, expected the war to be a rout in favor of the Russian forces. However, despite being vastly outnumbered, the Ukrainian military has more than held its own. The Russian military has appeared incompetent at times, including using ill-equipped convoy trucks — some with logs for armor. In contrast, the Ukrainian military has been surprisingly resourceful. The latest example is tricking Russian snipers due to a unique feature in old British farm pickup trucks.

Until recently, farmers used the aging British farm pickup trucks for such things as hauling tools and manure around the idyllic countryside. However, thanks to Car4ukraine, these trucks found a second life in Ukraine’s battle against Russia. The organization, founded shortly after the start of the invasion, retrofits civilian pick-up trucks for military use.

Ivan Oleksii is an esports analyst originally from Kherson, Ukraine. For his work with Car4ukraine, he buys used pickup trucks from around Europe. The Ukrainian military then uses the trucks in the ongoing war against the Russian invaders. To purchase the trucks, Oleksii and the Car4ukraine team crowdfunded all the money.

In an interview with Insider, Oleksii said that the organization has received around 100 pickup trucks. Before getting retrofitted into military-grade vehicles, most of the trucks were used for farm work.

While there are different types of British pickup trucks, they all have one thing in common. The driver’s seat is on the right-hand side. And because of this feature, the lives of many Ukrainian soldiers have been saved.

Oleksii said that Russian snippers get fooled into aiming at the passenger seat, mistakenly thinking that they are shooting at the drivers. From a sniper’s vantage point, it’s difficult to tell the difference between the British right-hand drive trucks and the much more common left-hand drive trucks — since most have the same retrofitted look. Unlike in the U.K., Ukrainian and Russian trucks are right-hand drive models.

One of the reasons why Car4ukraine prioritizes British farm trucks is because they can buy them very cheaply. Due to the many years of use on farms, they often have scratches and smell bad. However, the trucks are still durable and highly capable.

The used pickup trucks sourced by Car4ukraine are primarily four-wheel drive models with 2.0-liter engines. They are right-hand drive British versions of such trucks as the Toyota Tundra and Hilux, Ford Ranger, Nissan Navara and KingCab, Mitsubishi L200, Jeep Gladiator, Маzda BT-50 and Mazda B2500, and Isuzu D-Max.

The trucks typically cost around $5,800. However, Car4ukrain bought some with over 100,000 miles on the odometer for as little as $2,000. Also, when hearing about their final destination in Ukraine, some farmers hand over the keys for as little as £1. 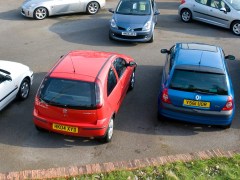 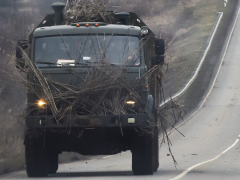 The old British farm pickup trucks are also a nimble alternative to larger military vehicles. Their configurability is an asset as well. After the trucks arrive in Ukraine, volunteer mechanics make special modifications to protect passengers from Russian mortar and shelling. This includes reinforcing them with steel plates. The mechanics also add stands to the back of the trucks. These stands can accommodate such weaponry as Stinger anti-tank weapons, machine guns, NLAWs, and Javelins.

One of the challenges that Ukraine faces against the Russian forces is the onslaught of cruise missiles. Often, the cruise missiles hit civilian populations and infrastructure. And on this front, the retrofitted pickup trucks have helped.

Oleksii told Insider about text messages that he received from a soldier driving one of the trucks imported by Car4ukraine: “A couple of days ago, we just received images of a cruise missile sent on Monday by Russia, but it was taken down by the machine gun from one of our trucks.”