This is the last place you want to break down. In the freezing cold, alone in the Utah wilderness in a new GMC Hummer EV. But, that’s exactly what happened to TFL Truck reviewer and YouTuber Roman Mica. He called it “another TFL misadventure,” when he suddenly lost all power in the truck while off-roading in the Utah wilderness all alone.

He was testing new tires for the Hummer EV

In a previous video, the truck got high centered on a rock because it didn’t have the clearance to get over it. TFL wanted to test approach, departure and breakover angles with taller tires.

But then, going down a hill, the truck suddenly dies. It gave the driver a warning, “’Four-wheel drive mode unavailable, schedule service.’ It just died,” said presenter Roman Mica. “I’m pressing the accelerator, and nothing is happening.” That’s not what you want in a $115,000 EV truck.

The Hummer EV is not the truck you want to break down when you’re off-road. The Hummer EV weighs 9,000 pounds, so you’re not pushing it. But, when it works, it has all the goodies you want for going off-roading. It has several trail cameras, including one that shows you what’s going on under the truck. It can automatically air down the truck’s tires, it shows you your pitch and roll on a cool graphic, and of course, it has four-wheel drive.

And, of course, TFL did something that most off-roaders will tell you not to do: travel alone.

This wasn’t the first time it broke down 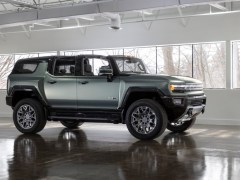 This wasn’t the first time that the TFL Hummer left Mica stranded. The last time was in traffic. By unhooking the battery, he was able to re-set the truck and get going again. Overall, Mica did get the truck home, but not without some struggles. The two-wheel drive mode was enough to hit the trails again, but it looks like there were some hairy moments as he wished he had four-wheel drive.

The bigger tires with more grip did help Mica get through the tough stuff, and home, even in two-wheel drive. But, of course, that’s off-roading, and why we like to test ourselves and our vehicles in the boonies. In the end, Mica got home fine. After parking the truck and having a McMuffin, the truck diagnosed and fixed the software glitch. The all-wheel drive and the all-wheel steering functions returned.