In the United States and other wealthy countries, it’s easy to take owning and driving a car for granted. It’s such a common thing that many of us could never imagine life without our vehicle. However, for most of the world, owning a car is a luxury. The number of people around the world that own a car is much less than you might think.

America grew up with the automobile, with many cities in the country built around roadways. Cars are such a big part of everyday life in the U.S., whether to drive to work, run errands, or travel on long trips. For many, the vehicle that one drives also forms an important part of their identity.

In much of the world, though, the percentage of people that own and drive a car is very low. Any type of car is a luxury for most people on the planet. The expense of buying one, along with ownership costs such as fuel, maintenance, and insurance, is not something that is affordable or makes much financial sense.

Furthermore, many other countries have better public transportation. Also, the population centers are less spread out than in America. This makes riding the bus, a train, a bicycle, or walking a more practical alternative compared to the U.S.

In 2022, there were around 1.446 billion cars in the world, as detailed by PD Insurance. That’s a massive number of vehicles, right? However, the global population is multiple times larger, as it surpassed eight billion people in 2022. This means that only a small fraction of the world’s population owns a car.

Based on these figures, an estimated 18% of people in the world own a car. This equates to around one out of every six people.

However, the number of people that own a car is likely even lower. For one, some people own two or more vehicles. Also, there are a considerable number of fleet vehicles, such as long-haul semi-trucks and delivery vans. There are also many rental cars. Accounting for all of these things, the percentage of the world’s population that owns a car is probably closer to 10% — or around one in 10 people.

What country has the highest percentage of car owners?

Unsurprisingly, among major countries, the U.S. has the highest percentage of car owners in the world, as detailed by Hedges Company. On a per capita basis, the U.S. has 0.89 cars per person. It edges out New Zealand (0.88).

However, there is only one country that officially has more than one vehicle per person: the Republic of San Marino (1.3), a tiny nation surrounded by Northwest Italy. However, many of these cars are not actually in San Marino. The country is a tax haven, so many drivers in Italy and other countries in Europe buy and register their vehicles in San Marino — but keep them elsewhere.

The Principality of Monaco, another tiny nation, located on the French Riviera, also comes close to one car per person (0.91). Additionally, there’s Andorra, a small principality on the border between Spain and France. As another tax haven, Andorra sometimes makes the list of countries with more than one vehicle per person. The vehicle registration data in Andorra is challenging to obtain, though, so we can’t officially verify its percentage of car ownership. Overall, the countries with the highest per capita numbers of cars are in North America, Europe, and the Southwest Pacific (Australia and New Zealand).

In terms of the highest number of cars, though, China has the most, with 302 million vehicles, followed by the U.S. with 267 million. However, the population of China (1.412 billion) is significantly higher than the U.S. (332 million), so the Asian country has a much lower per capita number of vehicles (0.21).

What country has the lowest percentage of car owners? 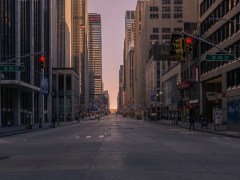 Should Cars Be Banned From Cities? — The Answer Might Surprise You

The country with the lowest percentage of car owners is the Democratic Republic of Congo — with only 0.004 cars per capita. This translates to only one car for every 250 people that live in the African country. Also, Africa ties with Antarctica for the continent with the lowest per capita number of vehicles (0.05).

So, if you drive and own a car, consider yourself lucky. You’re in a small minority. By global standards, you are a wealthy person if you own a car. I’ve worked and traveled to many countries around the world, including ones with very low poverty rates. Many Americans would be shocked at the extreme levels of poverty for which much of the world lives.

In the U.S., being, being poor means driving a car to the bank to cash a welfare check. In some impoverished countries, it means having to walk many miles in search of clean drinking water so that you don’t die of dysentery.

With this in mind, I find it quite ridiculous when some drivers mock and criticize others for driving a low-priced entry-level vehicle or an old car. It’s somewhat amusing to see the lack of global awareness and misguided belief that one needs to drive a luxury car to be considered wealthy or to justify their self-worth. However, by global standards, if you have your own car, even if it’s a budget one, you’re wealthy.