Quick, where did the word “Jeep” originally come from? If you said it was first a car brand, think again. But nobody’s sure why “Jeep” was such popular slang for the popular 4WD among WWII soldiers. Here are the most popular theories so you can decide for yourself.

All of the 1/4-ton 4WD “Quads” Ford built for WWII were labeled as “GP.” One common myth is that Jeep was a slang word American soldiers invented for their trusty “GP” 4x4s. It’s also a common myth that GP stood for “General Purpose” vehicle. But the truth is a bit more complicated.

During WII, GPW was Ford’s internal code for government contract (G) 80-inch wheelbase reconnaissance vehicle (P), built under license because it was designed by Willys (W). The Willys versions were called the MB. In this case, MB stood for the second generation of the “Military” model 4×4. Only later would the acronym GP would come to mean “General Purpose” military vehicle.

The only problem is that the first recorded use of “Jeep” as slang for the quad predated the Ford models built under license. Willys introduced its prototype MA to the press, famously driving it up the steps of the Capitol in February 1941. Test driver Irving “Red” Housman referred to the pre-GPW 4×4 as a “Jeep.”

Theory 2: Jeep was a cartoon character

Back in 1936, a Popeye comic book introduced an interesting sidekick for the sailor. Eugene the “Jeep” (also written Eugene-the-Jeep) was an interdimensional dog (species: Jeep) known for the ability to go anywhere. He can teleport, walk through walls, and climb any surface. After the comic books, Eugene also appeared in the Popeye cartoons.

By the time Willys introduced the Jeep, there is a good chance the general public assumed its name was based on the Popeye character. In addition, WWII soldiers may have been familiar with the Popeye character, so the slang name for the 4×4 rolled off their tongues. This theory has become a persistent urban legend, the only problem is that there is a much more likely origin of the name “Jeep.”

See Popeye’s buddy Eugene-the-Jeep in the cartoon clip below:

According to MotorTrend, the word Jeep dates back to at least WWI. In those days, it was military slang for an untested soldier or vehicle. This would explain why Red Housman referred to the Willys prototype as a Jeep back in 1941.

The letters “GP” on the Ford versions, combined with the Popeye character may explain why the slang caught on so quickly among soldiers during the war. Interestingly, the name was not trademarked until after the war. Willy attempted to trademark “Jeep” when it launched the Civilian Jeep (CJ). But because the word was considered common slang, the government wouldn’t grant the trademark until 1950, after a long legal battle.

However the Jeep got its name, the little 4×4 was universally loved throughout the war. Here’s what a correspondent said:

The Willys Jeep MB “did everything. It went everywhere. Was a faithful as a dog, as strong as a mule, and as agile as a goat. It constantly carried twice what it was designed for and still kept going.”

Next, read more about Eugene-the-Jeep or learn the history of the brand in the video below:

What Do the Letters RAM Stand For? 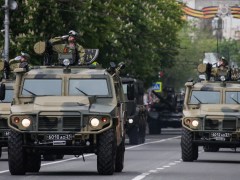 The Russian Army Is Cummins Powered 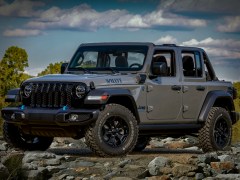 What Do the Letters JEEP Stand For?