Over 50 years ago, the original Z car redefined what the term “sports car” meant. It combined exquisite looks, nimble handling, and forceful acceleration into a blue-collar price tag. Although times have changed, Datsun, later Nissan, followed the same recipe for each of its subsequent Z cars.

After a two-year hiatus, Nissan’s high-performance sports car is back, dropping the number designation for the lone last letter in the alphabet. Keeping its blend of speed and style, U.S. News also confirms it’s the fastest car for the money.

How fast is the new Z?

The outgoing Nissan 370Z’s 3.7-liter VQ-series V6 produced 332 horsepower and 270 lb-ft of torque. While the new Z’s engine is only three liters, it has a couple of turbos attached to it. Engine output is now an impressive 400 horsepower, and torque is up to 350 lb-ft. Power is still routed to the rear wheels through either a six-speed manual transmission or a nine-speed, rev-matching, paddled-shifted automatic, according to U.S. News.

Yes, the twin-turbocharged V6 has less displacement than the engine it replaces. However, it’s a big step in refinement from the VQ predecessor, says Hagerty. Swapped with a GT-R-style VR-series powerplant, one of the most significant improvements is responsiveness. Typically, computer management software conservatively estimates how fast the turbo is spinning to mitigate overspeeding, thus pulling power from the engine. The VR30DDTT in the new Nissan Z doesn’t have this problem, as it has a turbo shaft speed sensor and corresponding dashboard gauge. Waxing mechanical aside, the Z’s 4.9-second 0-60 mph time bests the 370Z but merely matches that of the 350-hp 370Z NISMO, MotorTrend states. Jalopnik explains the performance gap can be chalked up to a nearly 200-lb weight gain from the 370Z to the Z.

Does the Nissan Z have a nice interior?

On the inside, the Nissan Z has a well-appointed cabin. The base Z Sport has cloth seats but leather-wrapped trimmings. The Performance and Proto Spec trim levels gain premium leather all around, including seat upholstery, which is also heated.

Each Z has an exciting 12.3-inch digital dashboard with fully digital gauges, Bluetooth, and a voice command-capable color touchscreen infotainment system. The Sport has an 8-inch system, whereas the Performance and Proto Spec gain a 9-inch screen. All models can integrate Apple CarPlay and Android Auto, but only the top two have CarPlay wireless functionality.

Does the Nissan Z handle well?

The Nissan Z is a pleasing yet agile performer. The steering is precise, reportedly using the same 13:7 ratio as the previous model, reports Car and Driver. Yet, it’s electrically assisted, which poses criticism from tradition-minded motorists.

While the Z is a performance car, it doesn’t sacrifice comfort. With a front double wishbone and rear multi-link suspension, it handles hard cornering well but still allows some body roll. The car is enjoyable for driving in town and barnstorming back roads, so it’s not totally track-focused. It also stops well with ventilated disc brakes all around, 12.6 inches in the front and 12.1 in the rear. Upper trim levels get 14-inch Akebono four-piston front disc brakes, with 13.8-inch two-piston discs in the rear.

How much does the Nissan Z cost?

The Nissan Z Sport will set shoppers back $39,990. However, Nissan says the MSRP doesn’t reflect tax, title, license, options, or destination fee. Such is true for the $49,990 Z Performance and the $52,990 Z Proto Spec. The price remains the same irrespective of which gearbox is selected.

Nissan says there’s “limited availability” for the Sport and Performance configurations. It’s currently unclear how many will be built, but the Proto Spec is already set to be rare. Only 240 will be available nationwide.

Is the Z Nissan’s only sports car?

Nissan likes to tout the five-passenger Maxima as the company’s “four-door sports car.” Considering the Maxima is built on Nissan’s D platform—sharing underpinnings with the Pathfinder SUV—it’s more of an embellishment. Most have at least heard of the Japanese automaker’s fabled GTR, which is undoubtedly a snarling sports car, if not a supercar. The 400-horsepower, intelligently handling Z may appear as a baby GTR, but think again.

The Nissan Z isn’t necessarily a purpose-built sports car. The Nissan FM platform, on which the Z was built, underpins everything from the Z to Infiniti sedans and even the Infiniti QX70 SUV. The GT-R, on the other hand, is the only example of the Nissan PM platform, albeit it is an “enhanced FM” architecture.

Should you buy the new Z? 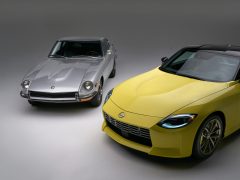 Despite the chassis similarities with Infiniti sedans, the Nissan Z is a worthy successor to the 370Z. The luxurious yet no-nonsense interior reminds customers that although the Z is a perfect daily driver, it’s more performance-focused than ever. Seemingly disagreeable square front grilles aside, the Z’s styling is simple, elegant, and pays wonderful homage to the 1969 240Z.