The Ford Ranger has long been the Blue Oval’s mid-size truck. And in recent years, it has not really been the most popular pickup on the market. Now, this drop in sales does not necessarily mean that the Ranger is a bad truck. The big issue might be that the Ford Ranger is an old model. Here in the United States, we are a generation behind what places like Europe get. But it does look like Ford is going to reinvigorate the Ranger with a Raptor trim.

Is the Ford Ranger Raptor coming to the U.S.?

Ford has confirmed that the Ranger Raptor truck will be coming to the United States. And that means that consumers will have access to yet another mid-size truck with off-road chops. The Ford Ranger Raptor has long been available in other markets, just not in the States. So it is exciting that Ford is making this move.

This mid-size truck will compete directly with models like the Nissan Frontier PRO-4X and Toyota Tacoma TRD Pro. It will be interesting to see how it stacks against those more established pickups. But plenty of truck drivers prefer the Blue Oval to other brands.

The Ranger Raptor will take things to the next level

The Ford Ranger does already have some off-road packages. But the Raptor trim will definitely kick things up a notch. We expected it to get flared fenders, big tires, and some extra ground clearance.

Raptor is an extremely important brand for Ford. So, it makes sense that it wants this truck to be taken seriously. It will be joining the Bronco Raptor and F-150 Raptor once it gets released.

The Ranger Raptor will come equipped with a twin-turbocharged 3.0-liter V6 engine. Numbers are projected at 392 horsepower and 430 pound-foot of torque. Those numbers are much more potent than what the Ford Ranger currently offers.

Also notable is that this mid-size truck will feature locking front and rear differentials. Showing its commitment to taking the road less traveled.

When is this off-road truck arriving?

It’s expected that the Ranger Raptor will arrive for the 2024 model year. That is when Ford intends to bring the next-gen Ranger to the United States. It is possible that the specifics of this truck could change once Ford releases it. For instance, it could gain more or less power. 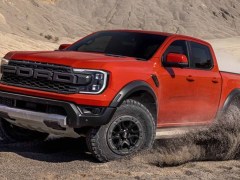 5 Reasons the 2023 Ford Ranger Raptor Is Worth Waiting For

But really, we won’t know until Ford makes its official reveal. For now, plenty of folks are speculating what exactly the Ranger Raptor will be. But it will undoubtedly be a major upgrade for the Ranger, and it will likely be a popular vehicle.