The new Ram 1500 Revolution EV concept showed up at CES 2023 amid fanfare and flashbulbs. It wasn’t long after this new fully-electric truck was revealed that we learned a dirty little secret. This new electric Ram truck will offer a gas-powered range extender as an option. Could this turn the clocks back for the EV truck market?

Why does the Ram 1500 EV offer a range extender?

Some of the specifications of the new electric Ram truck include 500 miles of driving range, 10,000 pounds of towing capacity, and fast charging capability to recharge the batteries to 80 percent in less than thirty minutes.

All of these specifications meet or beat other electric pickups, bringing us back to the question posed. Why does this truck need a range extender? This item could be the secret to alleviating range anxiety and the difficulties electric trucks face while towing.

Technically, electric trucks tow pretty well. We highlighted this fact by showing the towing test performed by TFL Trucks on the Gauntlet in Colorado. The difficulty faced by electric pickups doesn’t have anything to do with the power of the pickup but with the electric driving range.

Towing lower the efficiency of any truck, including gas and diesel models. For electric trucks, the driving range is significantly reduced when pulling a trailer. The range extender of the Ram EV truck could offset this reduction. Adding a gasoline engine as a range extender turns this pickup into the Ram PHEV instead of a true EV, but it could be exactly what’s required.

The wraps are barely off the new Ram 1500 EV, and we’re already talking about changing this electric pickup. It might surprise you that Ford filed a patent for a bed-mounted range extender in 2018. Car and Driver tells us this was to be used in the new F-150 Lightning, but it was a traditional range extender.

To find a traditional model of a gasoline engine being used purely as an EV range extender, we need to look at the BMW i3. This car has a small two-cylinder engine that only recharged the battery pack. The new electric Ram truck could use a similar system. This would give this new pickup the added power required to tow heavy loads. It would also provide the added range to make it to the next charging station.

Where would the Ram 1500 EV house a gas engine used as a range extender?

The news of changing the entire program to a Ram PHEV by adding a gas engine is so fresh and new that we don’t know much about it yet. The engine used in the BMW i3 was so small that it couldn’t power this car for very long. If a gas engine is used in the new electric Ram truck to extend the battery range while towing, it will need to be stronger and larger than the now-defunct BMW hatchback.

Could we see a V6 engine take up the frunk space when the range extender option is chosen for this new truck? It’s certainly possible.

Will other electric trucks move backward to add a gas engine for towing?

“Just because your friend jumps off the bridge doesn’t mean you have to follow them.” While this has been said by mothers around the world for generations, in the automotive world, if one brand does something that works well, others tend to follow. If the new Ram 1500 EV is better with a gas-powered range extender, will other electric trucks follow? This is also possible, turning the clocks back on the electric truck market.

Next, check out whether or not the electric Ram truck is late to the party, or learn more about the new Ram 1500 EV in this video below: 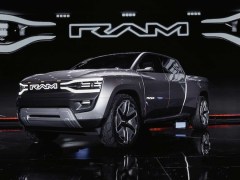