With the introduction of the new Ram 1500 Revolution concept truck this week, we finally got a look at the new truck. We also got some limited specs from the company that show that Ram, while it may be late to the EV truck party, isn’t playing. When it comes to the big three’s EV trucks, however, what makes these full-sized trucks different?

What electric truck has the most power?

The Ram 1500 Revolution was finally shown in concept form at the Consumer Electronics Show in Las Vegas. At CES, Ram showed that it can design a cool-looking truck, but sadly it didn’t release much technical info. However, we can figure one thing out. Stellantis has said that its motors can make up to 330kW of power, or 442.5 horsepower. With two of these motors powering the four-wheel drive Revolution, it could have as much as 885 horsepower.

That would make the new Ram the most powerful of the big three’s new trucks. The Ford F-150 Lightning makes 580 horsepower with the extended range battery pack. The Chevy and GMC trucks, however, make up to 754 horsepower with their extended battery.

We’re not forgetting about the cool Rivian R1T truck. While capable and quick, the Rivian is in a smaller size category than the new Ram, Chevy and Ford trucks.

Which electric truck has the most range?

Which electric truck Is bigger?

Without length and width numbers from Ram, yet, it’s hard to say which truck is the biggest. But, we do have some clues. The cabin of the Ram Revolution has enough room for three rows of passengers, with the back two sitting in folding jump seats. That means that its cabin is longer than other two-row trucks. If the bed is about the same length as a standard bed, it should be a bit longer than the others.

The Silverado EV is 19.5 feet long, or 233 inches. The Ford, too, is 233 inches long. Both trucks are about 80 inches wide. The Ram, however, could be wider. The eagle-eyed among us will note that on the concept it has a row of LED lights on the grille. The DOT requires trucks that are extra wide, like Ford’s Raptor and the Ram TRX, to have these lights.

How long is the Ram Revolution bed? 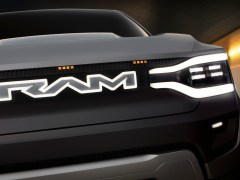 Ram Revolution Images: Check out What the New Ram EV Looks Like Inside and Out

The Revolution bed is 18 feet long (sort of) The Ram and the GM twins both have removable midgates in the back of the cab. With the midgate removed, and a bed extender added, the Ram’s bed becomes a massive 18 feet long. The Chevy’s can extend to 13 feet, via a passthrough. The Ford Lightning’s bed is a traditional 66-inches long.