If you need a three-row SUV, buying new is not always an option. That is why many consumers choose to look to the used car market when it comes to finding a vehicle. One popular SUV is the Honda Pilot, thanks to its perceived reliability and practical design. But which Honda Pilot is the most reliable?

Generally speaking, the Honda Pilot has been a reliable SUV. Some models will be more reliable than others, but it should be a safe choice overall. The Pilot SUV was first introduced for the 2003 model year, and it’s been hauling families ever since. It shares its platform with the Honda Odyssey as well as the Ridgeline pickup truck.

The Honda Pilot SUV is currently in its fourth generation. And that means there are a variety of used models out there. According to Vehicle History, the 2015 Pilot SUV might be the most reliable model.

The 2015 Pilot represents a good mix of value and reliability

Although it falls in the second generation of PIlot SUV, the 2015 model does come with some perks. It has the fewest number of owner complaints, and Honda was able to correct some of the issues that were found in previous models.

For around $20,000, you can find a 2015 Honda Pilot that comes with some legitimate bells and whistles, along with low mileage. Plus, the Pilot SUV can be a solid family vehicle with that third row of seating.

According to Kelley Blue Book, the 2015 Pilot SUV does have some cons. In terms of towing, it does fall short of some of the competition. Even when equipped properly, it can only tow up to 4,500 pounds. Additionally, the 3.5-liter V6 makes just 250 hp and 253 lb-ft of torque.

All that said, owner satisfaction with this three-row SUV does seem high. Even though it might be coming up on 10 years old in a few years.

What does this SUV compete with?

The Honda Pilot is not without competition, it has competitors from Toyota, Chevy, and others. Toyota has its Highlander, and Chevy has the Traverse. Both of these will likely be on your radar if you’re searching for a used three-row SUV. 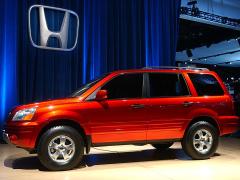 The Pilot still looks like a good option, even against its rivals. But it is always important to shop around when looking for an expensive product like an SUV. The second-gen Pilot will likely be cheaper than a newer model. A quick search on the used market shows that it goes for between $15,000 and $22,000, depending on configuration and condition.

The 2015 Pilot is available in a variety of configurations, and it offers things like all-wheel drive. Whether you are looking for a family SUV or something that is ready for a camping trip, this Honda SUV can likely handle it. Plus, the naturally aspirated V6 engine should be able to last for some time with proper maintenance.