Consumer Reports is known for being one of the most respected sources of information for both new and used cars. The site puts its vehicles through extensive testing to measure performance potential, interior quality, and more. CR also provides shoppers with reliability information about other items like electronics and appliances.

Still, it’s clear that automobiles take the longest to examine. Have you ever wondered how many vehicles CR tests in a single year?

How does Consumer Reports test its vehicles?

Before testing even begins, Consumer Reports says its testers drive any car for at least 2,000 miles. Ride comfort is measured on public roads, but every other evaluation takes place on CR’s test track. This facility consists of a 4,400-ft straight course, a 33-percent-grade incline, and a 3,500-ft handling course.

CR focuses on safety first when it comes to vehicle testing. All of the ADAS safety features are examined by replicating real-world scenarios, ensuring that each one works correctly. For example, the accuracy of pedestrian detection features is determined by placing a test dummy in the car’s path.

CR also uses its own lane markers to test lane-keeping assist software and foam cars for AEB systems. Each vehicle also gets a rating based on how easily it can accommodate child seats.

CR posts 0-30 mph and 0-60 mph acceleration times for its tested vehicles, measured with an accurate GPS tracking device. CR will also test the emergency handling of a car using cones set up on one of the test track courses. This is so drivers know how likely they are to avoid sudden obstacles at high speeds.

On the inside, testers evaluate the driver’s position and how much visibility you can expect from each angle. Vehicles also get ratings for seat access, comfort, and access to the cargo area. CR measures usable storage space (how much is available with the gate down and the rear seats folded) using an expandable pipe-frame box.

Consumer Reports also judges a car’s road test score based on the accessibility of its control layout. For example, controls that are hard to reach or recognize result in a lower rating overall. CR also tests the intuitiveness of a car’s infotainment interface.

Here’s how many cars Consumer Reports can annually test

Consumer Reports says that it tests around 50 cars per year, and each one is purchased anonymously to eliminate bias. In addition to the tests, each vehicle is driven for about 10,000 miles annually. This extra insight lets readers know how well a car’s ride quality holds up long-term.

The site also tests 60 brands of tires and 30 child seats per year. Usually, CR won’t test each individual model year of a car unless there have been significant changes. Instead, the site will wait until the vehicle has been redesigned and review the latest model.

How many people does it take to test cars for CR? 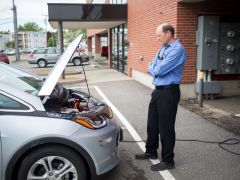 CR says that its testing facility is staffed by a team of about 30 people in various positions. Engineers and technicians may help judge a car’s roadworthiness, while videographers and photographers document the tests.

Statisticians calculate the overall reliability of each car over each model year. Additionally, writers and editors must put all the information together for consumers. While not all critics agree with CR’s performance evaluations, we certainly appreciate the site’s dedication to consumer safety and awareness.