Cold winter weather causes all sorts of challenges for drivers. This includes difficulty starting a car, driving on snowy and icy roads, and lower visibility. Another common problem in the winter is ice building up on the windshield. However, there is a “magic” button in your car that can defrost ice from a windshield very fast. Many drivers already know about this button. However, as we detail below, some people were surprised to learn about it.

We’re now in the depths of winter, as cold weather hits many parts of the country. And with the low temperatures, drivers face the struggle of ice forming on a windshield. We wake up in the morning, head out to our cars, and vigorously chip away at the ice with a scraper.

However, as detailed by Mirror, there’s a viral TikTok video showing a very fast way to get ice off the windshield. You can press a “magic” button to defrost it quickly. The TikTok video is somewhat “tongue-in-cheek,” for it’s a button that’s a standard feature for most modern cars. However, the intrigue of the video is how some drivers never knew about the button — and are surprised to discover it.

The video, posted on the United Kingdom-based Driving Test Success TikTok channel, details how you can quickly de-ice a car windshield. And the “magic” button in question is the windshield fan. Press the windshield fan button to the maximum airflow setting and turn the temperature to high. Doing these things warms up the glass, and like magic, the ice quickly melts.

The video, which has some funky music to put you in a defrosting mood, starts by asking, “Frozen windscreen?” “Windscreen” is the British English word for “windshield.” The video then states, “Put the temperature on high. Put the front windscreen fan on max. The ice will start to melt from the heat. Wipe away excess water and return the fan to normal.” The video also shows a view from inside the cabin of the ice quickly melting from the windshield.

The most interesting aspect of the TikTok video is the surprised reactions from some commenters upon seeing the fast way to de-ice a car windshield. While the defrosting tip is obvious to experienced drivers, some people that are likely new to driving were astonished to discover the hack.

Here are a few of the reactions of surprise from commenters to the video:

However, some TikTok uses dismissively commented about the “obvious” fast defrosting hack — and mock those that don’t know about it:

Regarding the criticisms, some might not realize that there are many beginner drivers for which this information is useful. Also, while driving is common in America, the U.K., and other wealthy countries, the vast majority of the world’s population doesn’t own or drive a car. Automotive tips are a novelty to them.

Furthermore, there are billions of people around the planet that don’t live in a cold winter climate. They rarely or never saw snowy or icy weather conditions, so seeing ice melt from a windshield is a bizarre sight to many of them. 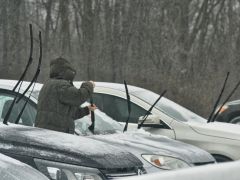 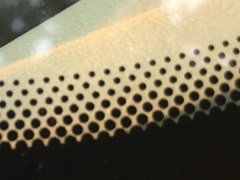 Why Does a Car Windshield Have Small Black Dots? 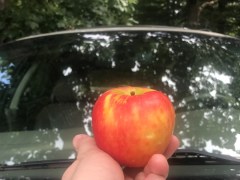