It’s not uncommon for specific cars to be great at one thing but still fall into the category of the worst for another. Some auto brands are synonymous with performance but don’t necessarily rank well in cost-of-ownership metrics, for example. And in a recent study ranking certain luxury cars on their five-year depreciation rates, one such brand is among the absolute worst.

When you buy a luxury car, you expect it to be upscale, high-quality, and durable in every detail. But if you buy this luxury vehicle brand, you can expect terrible depreciation rates. And it might just sway your decision when it comes time to buy.

It’s certainly no secret that when it comes to investments, you will lose money when buying almost any vehicle. The value of a new car will diminish the second you roll off the dealership lot. But you can be smart about minimizing that depreciation if you know which vehicles hold their value longer and better.

Today’s consumers are driving their cars longer than ever before. However, when it comes time for you to trade in or sell, they want to know they can command the most possible asking price. But there’s more, as Lending Tree points out, regarding financing. Depreciation will influence if you owe more on your auto loan than the car’s worth. It will factor into your overall luxury car cost of ownership. Choosing a model with increased depreciation could translate to thousands of dollars lost.

The one luxury brand with the worst five-year resale value

Car Edge sifted through the data regarding today’s most popular luxury cars and upscale brands to rank those with the worst three, five, and seven-year depreciation rates. Some brands with tanking depreciation rates in the five-year category include Jaguar, Infiniti, and Mercedes-Benz. But one luxury brand among the ranks that might surprise you is Land Rover.

Land Rovers are a joy to drive, known for their incredible capabilities as go-anywhere vehicles and top-notch luxury components. But prepare to lose a lot of money if you own one. Along with high sticker pricing and pretty steep maintenance expenses, Land Rover vehicles significantly drop in value quickly, according to Car Edge. Based on the analytics, Land Rover models average a five-year resale value of only 65.48% of their original MSRPs. 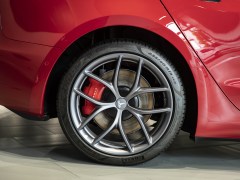 This Luxury Brand Has the Best Resale Value

When you buy any vehicle, you should carefully consider the depreciation rate, as it might affect your financing and the overall cost of ownership in a negative way. And if you’re eyeing a luxury car, be mindful of these brands with higher-than-average depreciation estimates. Land Rover is one of the best luxury brands regarding performance, driving dynamics, high-quality materials, and upscale touch points. But it also happens to be among the worst when it comes to depreciation.