When you think about a long-lasting Toyota model, several models come to mind. Reliable Toyota models like the Toyota Tacoma pickup and Toyota 4Runner SUV are easy choices. But there is one best-selling Toyota model that isn’t an SUV or Truck scoring well in these reliability ratings. The Toyota Camry is not just a popular choice today, but has been for generations. Thanks to its high reliability scores, the Toyota Camry was one of the best buys for drivers in 2022.

The best-selling sedan in 2022 is the Toyota Camry

At over 295,000 units sold, the Toyota Camry is the one sedan to crack the top 10 in vehicle sales for 2022. In fact, this Car and Driver list, shows that only the Toyota Corolla joins the Camry as gas-powered sedans in the Top 15. In a world dominated by SUVs and trucks, the reliable reputation of the Camry is the key to its popularity. This is despite cars rapidly losing favor among American car buyers overall.

How many miles can you go with a Toyota Camry?

Of course, a history of reliability can’t be built on a single year of sales numbers. In a lifespan study by iSeeCars, the Toyota Camry rated fourth with a potential lifespan of 223,249 miles on average. Two other Toyota models join the Camry in the cars category, including the Toyota Avalon. And when considering hybrid lifespan, the Toyota Camry Hybrid once again sits in the top five, clocking in at third behind a pair of its Toyota siblings.

The history of the Toyota Camry 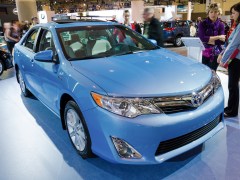 Launched in 1983, the Toyota Camry has seen a lot of changes over the years. Its humble start as a small, four-door sedan made it an excellent choice for families in the mid-80s. Since its inception, the Camry has been a wagon, a coupe, and even a convertible throughout the years. But these days, the Camry is back to its old ways. As a four-door sedan with efficiency and comfort as the focus, the Camry formula has led the pack for nearly two decades.

For 2022, the Toyota Camry lineup added a sporty option in the TRD model. This version includes sport suspension and brakes, aerodynamic enhancements, and the 3.5-liter V6 that is available throughout the traditional Camry lineup.

A reliable reputation makes the Camry a good buy

No matter the iteration, the Camry has long been regarded as one of the most reliable vehicles you can buy. This is no accident, as Toyota’s focus has historically been making daily drivers that beat the competition over the long haul, not the stat sheet. And it’s no wonder, with an average lifespan of over 200,000 miles, according to a Consumer Reports survey. Even if a Toyota Camry isn’t the most exciting choice in your car search, it may just be the long-lasting Toyota model you want to keep you on the road.