Although luxury trucks like the Ford F-150 Limited and Ram 1500 Limited seem like the norm now, there was a time when luxury pickup trucks did not exist. Simply put, auto manufacturers did not see a point in mixing premium features with something that was supposed to be a work vehicle. But that all changed with the introduction of the Lincoln Blackwood truck. A hilariously bad pickup that was discontinued after one model year.

Why did the Lincoln Blackwood fail?

The Lincoln Blackwood lacked capability and practicality, two things that truck buyers want from their vehicles. This Lincoln truck could not come equipped with four-wheel drive, and the Blackwood didn’t have a usable payload capacity.

Then, there’s the price. In 2002, the Lincoln Blackwood had a starting MSRP of over $50,000. Adjusted for inflation in 2023, that’s nearly $85k. So, for over $80,000, you got a truck without a usable bed, no 4WD, and seating for just four passengers. It seems clear that the Blackwood was a Lincoln truck destined for failure.

To make matters worse, Lincoln struggled to produce a meaningful number of Blackwood trucks. Lincoln only produced 3,356 units during the production run of its pickup truck, which only lasted 15 months.

To put things in perspective, Lincoln had planned to sell about 18,000 units over multiple years.

Maybe the Blackwood was built too soon

Although luxury trucks are fairly popular today, at the time of the Lincoln Blackwood, they weren’t really a thing. The Blackwood was based on the Ford F-150, but Lincoln aimed to make it more upscale. Even the side panels of the bed were meant to emulate wood.

That’s not the only odd design choice about this Lincoln pickup truck. The bed was covered with a permanently-mounted tonneau cover. It is power-operated and does provide a watertight trunk. That feature does make the Blackwood seem almost like a Town Car, but with a pickup truck bed.

Unfortunately, if you want to use the bed, it is covered in carpet with sides lined by aluminum. That means the Blackwood probably should not be hauling around dirty items. It’s more suited for carrying your golf clubs to the course.

What is the most luxurious truck in 2023?

According to Car and Driver, perhaps the most luxurious truck in 2023 is the GMC Sierra Denali Ultimate. You are likely familiar with the Denali brand of GMC, but the Ultimate takes it to the next level. It also has a starting cost of around $85,000, which means in 2023, it has the same kind of pricing that the Lincoln Blackwood did back in 2002. 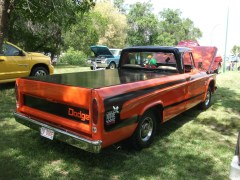 So, clearly, some folks are willing to shell out that kind of money for a luxury truck. The big difference is trucks like the F-150 Limited and Sierra 1500 Denali are actually usable. These vehicles have traditional beds, are 4WD, and can haul. Those are all things that the Blackwood lacked.

The failure of the Blackwood did not stop Lincoln from exploring trucks in the future. Back in 2005, Lincoln once again borrowed the F-150 to build the Mark LT. The Mark LT was another flop for the brand, and in the U.S., it only lasted a single generation.