Kia is a South Korean auto manufacturer that sells a variety of SUV, hybrid, and electric vehicles, earning the company more than 17 billion annually. While today’s statistics are impressive for the automotive company, like so many other vehicle brands, Kia came from humble beginnings. Not only did the company only start out by making bicycle parts, but it also took the company 30 years to design, manufacture, and sell its first historic car for consumers.

Many people also wonder what the brand name means. Is it a Korean word? Is it an acronym? Let’s find out more about the brand, its history, and just what the word Kia really stands for.

The Kia Corporation first got its start in 1944, according to Kia. It is the oldest motor vehicle manufacturer in South Korea. Like many other motor companies, Kia’s first models were not automobiles. Instead, they specialized in bicycles. In 1957, the company began manufacturing motorcycles, then quickly moved into the automotive space with trucks starting in 1962 and cars beginning in 1974, according to Companies History.

It wasn’t until 1992 that Kia provided the first vehicles sporting the Kia name to consumers in North America, according to Zippia. Four dealerships in Portland, Oregon, were the first to sell Kias. However, in 1997, Kia was forced to declare bankruptcy due to the Asian financial crisis. This led Hyundai to purchase part of the company, leading to a lasting partnership between the two major brands.

Although thought to be an acronym, Kia is a Chinese-Korean word

While many customers believe that Kia is an acronym that stands for something, it is actually a single word, according to Rewind and Capture. It is a word that combines two Chinese-Korean characters. The first character KI means “to rise, stand, or awake.” The second character A references Asia. Put together, Kia means “to rise out of Asia,” according to the Kia company website.

However, the brand has gone through a couple of name changes since its first inception. Originally it was known as Kyungsung Precision Industry when it was still creating predominately bicycle parts. In 1952, once the company was producing its own complete bicycle model, the company was renamed Kia Industries.

The first car model released was the Kia Brisa 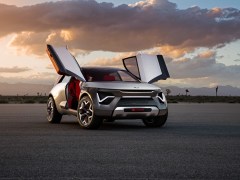 These Kia Electric SUVs Are Here, or Coming Soon

Although the company has been around since 1944, Kia did not start making consumer vehicles until 1974, according to Reference for Business. The company’s first four-wheeled vehicle was the Kia Brisa, manufactured from 1974-1981, according to IBAV. It was a subcompact 4-door sedan with engines ranging from 985-1272cc and 45.5-64kW horsepower. Throughout the 1980s, Kia worked on a variety of car models for the Asian market before creating a car that would break the company into the North American market. Once inside North America, Kia grew exponentially, which led to the brand creating a manufacturing plant in West Point, Georgia.

Since that first sedan, Kia has been on the cutting edge of trends in consumer vehicles. Today, Kia provides SUVs, sports sedans, hybrids, luxury, and all-electric vehicles. The company’s lasting success is attributed to methodical growth and maintaining the ability to provide sleek and attractive cars with cutting-edge technology for consumers.