GMC is well-known for its high-quality trucks and SUVs. However, do you know where the letters that form its name come from? Let’s investigate the intriguing history behind this iconic American car brand and the meaning behind those iconic three letters.

A bit of GMC history

According to the GMC Pressroom, the first GMC truck was sold in 1902. That’s when Max Grabowsky sold his first commercial truck to a company in Detroit, Michigan. Later that same year, the Grabowsky Motor Vehicle Company morphed into the Rapid Motor Vehicle Company. Within two years, United Chevrolet Buick GMC reports that Rapid Motors had churned out 75 trucks from its Pontiac, Michigan factory.

Those early commercial trucks weren’t much more than a steel frame with wooden spoked wheels and a bench seat, but they got the job done. In 1908, William C. Durant began buying up Rapid Motors stock and, the following year, had enough to bring the fledgling company into his own General Motors corporation. By 1912, the General Motors Truck Company (GMC) logo was being branded on the company’s trucks.

The meaning behind those initials

General Motors Company is a subsidiary of General Motors (GM), including the Chevrolet, Buick, and Cadillac brands. Unlike the other car brands under the General Motors umbrella, GMC is strictly a truck, SUV, and van automaker. Well, unless you include a couple of brief forays into the wacky world of “coupe utility” vehicles, otherwise recognized as a car/pickup hybrid. Additionally, the website Cars reports that the Sprint and Caballero were versions of the Chevrolet El Camino with a GMC badge slapped on for the ride. Unfortunately, neither lasted for long.

For more than a century, GMC has continued building trucks — a wide array of light to heavy-duty trucks, SUVs, passenger and commercial vans, buses, and military vehicles (including the Hummer).

It produced the Army’s standard AA truck during World War I, primarily used as a battlefield ambulance. Other GMC trucks served as searchlight trucks, cargo trucks, and troop carriers during that war.

During World War II, GMC sent nearly 600,000 trucks off to war. These 2-1/2-ton GMC “Jimmys” were essential to the war effort. The different lengths, body styles, and configurations allowed them to serve as cargo trucks, oil or water tankers, bomb transport, dump trucks, and even fire engines.

An amphibious version, the DUKW-353, was a 2.5-ton amphibious 6×6 military vehicle commonly known as the”Duck” and used to great effect throughout the war effort. It took GM engineers only 43 days to develop this vehicle, and more than 21,000 of them helped land troops on Pacific islands, in Sicily, and on the beaches of Normandy. 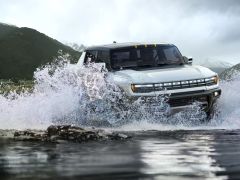 GMC has been a historic car brand since 1911, but the companies that would eventually become part of the brand had been making trucks well before that. The Reliance and Rapid truck companies started making trucks in Detroit in 1902. General Motors also acquired a controlling interest in a third automaker (the Randolph Motor Car Co.) but relinquished it back to the original owner in 1912.

The first vehicle produced by the GMC company was a Rapid. However, it didn’t appear under the GMC name. It wasn’t until 1912 that the first trucks carrying GMC branding hit the road. The company debuted them that year at the New York auto show. They were still made by Reliance and Rapid, but they proudly displayed the GMC badge.