There’s no getting around it; the Ford Maverick is one of the hottest vehicles on the market today. Buying one feels almost impossible because the Blue Oval is struggling to keep up with the demand for its small truck. But apparently, things are not all good for this compact pickup. A lawsuit was filed in the U.S. District Court for the Eastern District of Michigan, meaning the 2022 Maverick is in hot water.

The 2022 Ford Maverick has some recall problems

The 2022 Maverick might be a good small truck, but that does not mean it is immune to recalls. Pretty much any new vehicle will face a recall at some point in its life, and some are worse than others. In terms of the Ford Maverick recall, it is the side curtain airbags that are affected.

Now, Ford does claim that it has a “fix” for the problem. But according to a recent class-action lawsuit, the repairs do not actually correct the issue. And that is not good news for the Blue Oval.

The lawsuit covers the 65,000 Ford Mavericks that are impacted by the recall, along with other Ford vehicles that use the same type of airbags. John Solak v. Ford Motor Company was filed in the Eastern District of Michigan, and it will certainly be interested to see how it plays out.

Does the Maverick have airbag problems?

During an audit conducted by the NHTSA, the side curtain airbags were discovered to be defective. The displacement results have been shown to be more than the federal regulation limit of 100 mm. They are also higher than the Blue Oval’s initial test results, hence why there is a recall for the 2022 Maverick.

Now, it is important to note that the plaintiff in the lawsuit is not claiming that his airbag failed. And Ford is not aware of any real-world issues caused by the faulty airbags. Ford Motor Company initially issued the airbag recall back in August of 2022. But it seems like there is not a real fix in place yet.

According to Ford Authority, Maverick owners who have been impacted by this problem did not leave the dealership empty-handed. Apparently, Ford sent out a Yeti tumbler to help ease the pain of a faulty airbag. That gift was not enough to stop a class-action lawsuit from happening, though.

The Ford Maverick is still a popular small truck

Despite facing a recall, the popularity of Ford’s small truck has not seemed to waiver. Folks who want a small truck that looks like a traditional pickup are fairly limited in their options. Sure, there is the Hyundai Santa Cruz. But that vehicle looks more like a crossover than a truck. And the Santa Cruz lacks the off-road chops of the Maverick. 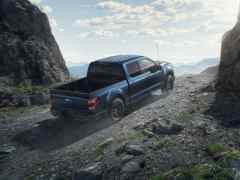 One of the reasons the Ford Maverick might be popular is its hybrid engine. The hybrid powertrain comes standard on this small truck, and it seems to be the model that is ordered the most. Just keep in mind that the 2022 Maverick is currently facing a lawsuit.