In terms of 4×4 SUVs, you have likely heard of things like the Jeep Wrangler and Ford Bronco. But outside of the United States, there is a whole world of off-roaders that we simply do not have access to. One of these is the Lada Niva, a Russian vehicle that finds its roots all the way back in the Soviet Union. And it is truly a 4×4 beast.

The Lada Niva is weird but great

In terms of being a 4×4 SUV, the Lada Niva truly shines. It might be wildly old-school, but it was designed to handle some of the toughest conditions on earth. And, for the most part, it can be kept in running order with a simple toolkit.

The Niva holds the honor of being the first mass-produced off-road vehicle that utilizes unibody construction. And it is estimated that over 650,000 units have been sold globally. Unfortunately for those of us in the States, the Lada Niva never graced our shores.

Where is the Lada Niva from?

The Niva originates from Russia. It first went into production in 1977, and for the longest time, it went largely unchanged. In fact, Lada still sells an old-school Niva. That variant is devoid of many creature comforts, focused instead on being a simple 4×4 SUV.

According to MotorTrend, the Lada Niva was sold in Canada for a period of time. So, if you are interested in getting a Niva in the United States, you might be able to find one closer to home. At the same time, the Niva was not necessarily a vehicle seen as worthy of preservation. Because of that, getting a clean version that is not imported from Europe might be a difficult task.

How expensive is the Niva?

In terms of cost, the Lada Niva is still a cheap 4×4 SUV with a starting cost of around $25,000. This price helps the Niva compete with other off-road SUVs, like the Suzuki Jimny. And, it makes it all the more painful that they are not sold in the United States. 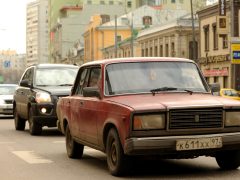 Undoubtedly, a vehicle like the Niva could not meet U.S. regulations. But, there is not really a cheap 4×4 SUV that you can buy new here. Models like the Jeep Wrangler and Toyota 4Runner have become increasingly expensive and increasingly complex. It would be nice to see a simple off-roader make its way to the American market.

Until then, if you want a cheap 4×4 SUV, your best bet is to look to the used market. There are plenty of vehicles out there that have not been hit by price increases. These include things like the Jeep Grand Cherokee WJ, which is legitimately capable and has not quite caught the attention of enthusiasts.

But, a Jeep will certainly lack the quirkiness of a Soviet-era SUV. And, you won’t get the same attention at cars and coffee. Maybe it is worth the undertaking of importing this Russian 4×4 to the United States.