There’s a new way to make your Mercedes-AMG G63 G-Class stand out even more. Why not add tank tracks? The new German company Delta 4×4 is now making a set of tracks for the G63 that promises to get you maximum traction wherever you may travel.

While the natural habitat for the G63, or G-Wagon, seems to be the boulevards of Beverly Hills, it was designed to tackle the great outdoors. Why not try it with these tank tracks?

Snow mobiles and tanks have known for years that wide caterpillar treads are the best for getting through tough snow and mud. Tires, after all, have a tendency to dig themselves in and get you stuck. So, Delta 4×4, a 40-year-old German company, decided to make a retrofit kit for Mercedes’s most-expensive SUV, the AMG G63. This SUV has the power from its turbocharged V8 to spin these complicated tracks.

What’s so special about G-wagons?

If we could ask Jay-Z, Kim Kardashian, or other celebrities why they love the G-Wagon SUV, we would. The G-Wagon has a presence like no other SUV. They’re tall, they’re blocky, and they’re owned by the rich and famous. But they are also incredibly capable.

The G-Wagon has a full-time four-wheel-drive, a big and powerful V8, and can be equipped with the latest technology and the highest-quality leather and materials. They are also built on a strong frame that gives them incredible off-road prowess and strength. A G-Wagon simply looks like nothing else on the road. 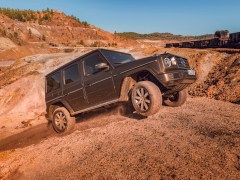 Why are G-Wagons so Expensive?

When your $180,000 G-Class Mercedes SUV isn’t enough, Brabus is there to upgrade it. When you really need something to set you apart, there’s the Brabus XLP, which takes out the utilitarian back and swaps it for a truck bed. Then, there’s the all-new Brabus P 900 Rocket Edition One of 10 that tacks on every bit of carbon fiber, quilted leather, and more to the pickup-ized XLP to make it even faster.

Mercedes will also sell you a 6×6 version, which is a six-wheel-drive version of the G-Wagon. It shares the same engine and interior, except it’s longer, and a lot pricier. The 6×6 version is sold in Europe for about $511,000. There’s also an upgraded 4×4 version.

Regardless, since Mercedes has produced the G-Wagon since the late 1970s basically unchanged, the aftermarket has responded with several strange, or practical, mods for this hyper-popular 4×4. There are convertible kits, kits to make the old versions look newer, aero kits, and of course lift kits and more for off-roading.