Drivers are still gushing about the new and improved Toyota Tundra. However, one model seems to be a little ignored. It’s time to investigate the 2023 Toyota Tundra TRD Sport because it offers a unique advantage that other trucks don’t have. It’s a sportier trim with a lowered suspension, but is it special?

What is the 2023 Toyota Tundra TRD Sport?

The 2023 Toyota Tundra TRD Sport is the most athletic Tundra model available. It’s not geared for ultra-luxury like the Capstone model and isn’t equipped with super off-roading upgrades like the TRD Pro trim.

If you associate the TRD title with off-roading, that’s fair. But it actually stands for Toyota Racing Division and supports Toyota’s racing interests worldwide. So, the racing sport truck is pretty neat. It’s different from the burly, lifted off-roaders. But is it worth it?

It might not be the fastest model available. It has the standard 3.5-liter V6 engine with 389 hp and 479 lb-ft of torque. It features more power than the outgoing model and can accelerate from 0 to 60 mph in about 6.6 seconds.

However, the I-FORCE Max hybrid powertrain pairs the same engine with electric motors to generate 437 hp and 583 lb-ft of torque. It reached 60 mph in about 5.7 seconds.

What comes with the 2023 Tundra TRD Sport?

The 2023 Toyota Tundra TRD Sport is based on the SR5 model but rides on 20-inch wheels and features a lowered sport suspension. The suspension includes TRD Sport Tuned Shock Absorbers to improve the ride and handling over the pavement.

So, the TRD Sport comes ready to tow and can pull up to 12,000 lbs. The towing package has a class IV towing hitch, an integrated trailer brake controller, and a four-pin and seven-pin trailer connector.

According to Double Clutch, the throttle response is sluggish. The hybrid powertrain is noticeably faster. But using Sport mode instead of Eco and Normal provides a satisfying amount of low-end torque.

Also, the ride is a bit firm, and bumps rattle through the cabin. Impacts are absorbed a little better at highway speeds. On a positive note, the steering is more refined, while other models can feel vague.

Is the Tundra TRD Sport worth buying? 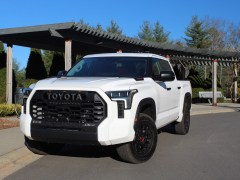 Yes, the 2023 Toyota Tundra TRD Sport is worth buying if you like the way the lowered model looks. But that’s about the only benefit. The package adds $5,800 to the price of the 2022 SR5 model and could cost more in 2023.

Perhaps the lowered suspension has better aerodynamics and could save more on fuel. But the package doesn’t improve the truck’s speed or ride quality. The $5,800 could be used for other upgrades, such as the i-FORCE MAX Hybrid powertrain that’s faster and more efficient.

We would love to get behind the wheel of a Tundra TRD Sport to compare how it feels to the Capstone, TRD Off-Road, and 1794 Editions. Until then, critics recommend passing for the TRD Off-Road or Limited trims.