The world might be moving toward electric vehicles, but commercial-sized trucks still don’t have an electric answer. Instead of only focusing on EVs, big trucks could possibly use hydrogen to become zero-emission vehicles and offer the power required for heavy workloads. It could be time for a hydrogen-powered Cummins engine lineup to replace the diesel engines currently offered.

What is special about a Cummins engine?

Hydrogen has the right mix of qualities for big trucks

A new Cummins engine lineup that uses hydrogen instead of diesel will reduce harmful pollutants to a nonexistent level. Muscle Cars & Trucks tells us Cummins is developing a new powertrain that uses the H2 molecule. Could we see hydrogen-powered Ram HD trucks that still bear the Cummins name?

Has this engine name put their money where their mouth is?

Cummins doesn’t only supply the diesel engines found in Ram HD trucks, they also make engines used for several commercial truck brands, and they build power generators. In a recent announcement, Cummins announced plans for a new 500-megawatt electrolyzer facility in Fridley, Minnesota, to produce hydrogen gas. This facility will only be powered by renewable energy, making it a carbon-neutral facility.

How does the Cummins hydrogen engine work?

We might be much closer to seeing the 6.7-liter Cummins diesel engine become the B6.7H model, which will be the hydrogen version of this engine. This new engine can replace many diesel models and maintain working numbers.

Transitioning to a hydrogen internal combustion engine, a new truck offers the same performance, cargo capacity, and payload as the diesel-powered truck. You can learn more about this in the Cummins video below.

How much power could this new engine offer?

The new 6.7-liter hydrogen engine is rated at 290 horsepower and 886 lb-ft of torque. This power output is similar to what we see in the 6.7-liter Cummins diesel engine, which produces incredible levels of torque.

This new hydrogen engine offers plenty of power to replace the diesel models in medium-duty trucks, and it can be easily integrated with existing diesel drivetrain components. This could make it one of the easiest substitutions in the entire automotive market.

Could it be more eco-friendly to produce hydrogen for this Cummins engine?

Most battery-powered electric vehicles still use power gained from burning fossil fuels. This is something most eco-aware people want to get away from. Hydrogen can be produced using electrolysis by using electricity from solar panels and wind turbines. This would truly reduce a vehicle’s carbon footprint and allow actual CO2-free driving.

The potential exists that hydrogen engines can release some NOx into the atmosphere, but this can be eliminated using aftermarket systems similar to what most diesel vehicles currently use. If the United States converts commercial and heavy-duty trucks to hydrogen, that would eliminate nearly 25% of all greenhouse gas emissions.

A new hydrogen Cummins engine lineup could quickly replace the diesel engines found in most heavy-duty and commercial trucks. This could be a huge step toward protecting our environment and utilizing alternative fuels for commercial trucking.

Next, check out the one Ram truck without a Cummins diesel engine or learn more about the new Cummins hydrogen engine in the video below: 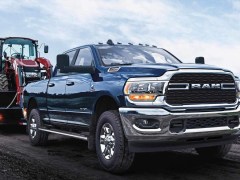