In the truck world, few are as legendary as the Ford F-Series. It’s not always ranked the best truck, though many years it is, or the least expensive, though some years are, or the fastest. But it’s held on to one particular superlative that keeps it on most truck people’s radar; It’s the best-selling truck. For 2022, it again was America’s best-selling truck.

Is the F-150 the best-selling vehicle in the world?

That’s a lot of trucks to sell. However, last year, however, Ford sold 726,004 F-Series trucks. This year, Ford, like many other automakers, faced a chip shortage that slowed production. At one point this summer the company had 45,000 unfinished trucks piling up in at Kentucky Speedway that were waiting for parts to be finished.

Why is the Ford F-150 the best-selling truck?

Ford’s F-Series of trucks sell well for several reasons. The most obvious reason is that the company sells thousands of them to fleet managers. The F-150 and Super Duty F-Series trucks are popular for municipal fleets, corporate fleets, and for small businesses like plumbing or electrical contractors. Those  trucks are sold through Ford Pro, and trucks like the F-150 Police Responder are popular, and a fleet F-150 starts at $34,445, the same as a retail truck.

Beyond the fleet sales, though, Ford’s F-150 remains popular because it comes in so many varieties. You can order a two-door, four-door, short-bed or long-bed, a hybrid motor or a gas V8, and of course the all-electric F-150 Lightning. It also comes in several premium special editions, such as the Raptor or Tremor, or even the ultra-lux Platinum version. The larger F-Series trucks, the F-250 to F-750, can tow so much you need a CDL to drive them with some trailers.

Ford has also made big strides to keep the trucks modern and relevant by making them with an aluminum body and turbocharged engines to save fuel. Though the Ram trucks have a better, independent, suspension, and the Silverado or Sierra may handle better, the F-150 sets the bar.

Ford completely redesigned the truck for the 2021 model year. That update added new larger screens, several new engine choices, and new 10-speed automatic and more. So, for 2023 trucks, Ford didn’t really add much, other than a few special edition trucks. The Rattler package adds some off-road goodies and a dual exhaust to the FX4 package. You can no longer order the Lariat trim in the super cab configuration, only the four-door. The base truck also gets a couple of small updates. 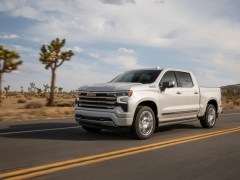 The Chevy Silverado truck comes in as the second-best-selling truck in America. That’s quite a feat, but when you add in the Silverado’s GMC brother, the Sierra, GM sells more full-sized trucks than Ford. That’s a benefit of having two distinct brands. Like the Ford F-Series, GMs trucks also come in a variety of special editions, configurations, and engines.