The Toyota Camry Hybrid has an excellent reputation for longevity and reliability. But how many miles does a Camry Hybrid last? And is it the longest-lasting hybrid car?

Analyzing data from over two-million used cars still on the road between January and October 2022, iSeeCars ranked vehicles for potential lifespan based on the mileage of the top one percent of cars within each model. Only vehicles with at least 10 production years between 2002 and 2021 and in production for the 2020 model year qualified for the study. The top 20 cars with the highest potential lifespan, including large three-row SUVs, light-duty pickup trucks, and hybrid cars, all exceeded 230,000 miles, with the highest nearing 300,000 miles.

How long can a Toyota Camry Hybrid last?

Based on the data provided by iSeeCars, the top one percent of Hybrid Camry cars averaged 230,547 miles. However, some of those high-mileage Camry Hybrids may still be in service, adding more miles as you read this.

According to CarComplaints, the first three Camry Hybrid model years, 2007, 2008, and 2009, have the most complaints. The most common complaints for these models include brake issues, engine problems, and interior accessory failures.

How reliable is the Toyota Camry Hybrid?

Consumer Reports rates the Toyota Camry Hybrid’s reliability near the top of its range for model years between 2008 to 2022, with 2020 as the only exception. In fact, according to CarComplaints, the 2020 Toyota Camry Hybrid experienced reports of engine and electrical system problems. However, overall, the Camry Hybrid is among the most reliable hybrid cars you can buy.

Which hybrid car lasts the longest? 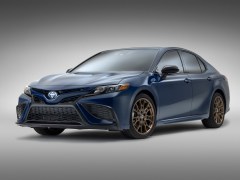 The longest-lasting hybrid car on the iSeeCars list is the Toyota Prius, with a potential lifespan of 250,601 miles. The Prius holds the record for the first production hybrid vehicle and keeps leading the way with its innovative hybrid powertrain. While early Prius models suffered from an engineering and design philosophy focused on fuel economy at the expense of outward appearance, the newly redesigned model has what Toyota calls “Style that goes the extra mile” and a performance boost along with all-wheel drive.

However, the title of longest-lasting hybrid could transfer to the current potential lifespan leader, the Toyota Sequoia, now that the large Toyota SUV features a twin-turbo V6 hybrid powertrain of its own. The traditional gasoline-only Sequoia blew away the competition with a potential lifespan exceeding 296,000 miles, besting its discontinued stablemate, the Toyota Land Cruiser, by over 16,000 miles. The Chevrolet Suburban, the closest non-Toyota entrant, came in third with 265,000 miles.