By now, you have probably heard all the news about used car retailers like CarMax and Carvana. We recently reported on whether or not Carvana could go bankrupt, considering all of the issues the company has been having over the past year. Its stock has dropped by 96%, and its vice president has been charged with 80 different crimes and offenses.

CarMax, on the other hand, reported an 86% drop in sales in the third quarter of 2022. Considering these facts, is now a good time to buy a car from either of these retailers?

Let’s start with Carvana. If you have been paying attention to the news in the last year, you’ll know that the online used car retailer has seen its share of customer complaints. These complaints included missing vehicle titles, improperly issuing temporary registrations, fraud, and destroyed documents.

According to Money Under 30, “Carvana saw its dealer license suspended in North Carolina, Florida, Michigan, and Illinois.” North Carolina and Florida eventually let up on the company, but it’s still in hot water in the two others. That all being said, it may not be a good idea to get a car from Carvana right now.

Some Carvana customers have reported missing the title to the car they just bought for up to 11 months. As you may know, you can’t register a car without a title, so it’s a pretty big issue. Ultimately, it’s up to you whether or not you want to get a car from Carvana, but the writing could be on the wall for them.

Is buying a car from CarMax still a good idea?

As stated before, CarMax’s stock slid last year, which could mean trouble for the used car retailer. However, CNBC reports that it has risen by 18% since December. If anything, it could be a normal sales slump, but it’s too early in the year to tell.

Either way, a declining stock doesn’t necessarily spell doom for the used car retailer. There are still plenty of customers obtaining cars from CarMax, and their prices look on par with the rest of the market – albeit they’re still a little high.

However, CarMax’s quality control is as good as ever. The stores also allow customers to take 24-hour test drives and provide extended warranties, which is a better deal than Carvana’s business model.

A traditional used car dealership could be a better bet 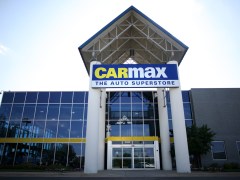 Carmax Pays the Max For Your Used Car, Study Shows 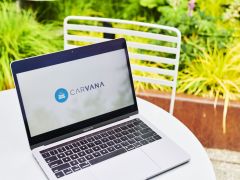 If you’re still unsure if you want to buy a car from either CarMax or Carvana, you could consider a used car from a local dealership. Used car prices have been on the decline lately, so you may be able to get a decent deal on the car that you want.

As always, remember to do as much research as possible before stepping onto a dealer lot and have a pre-purchase inspection done before signing any contracts. Taking the necessary steps could prevent you from getting many headaches later on. Lastly, make sure that the dealer has the car’s title so that you can register it properly.