For the 2023 model year, Honda revamped and completely redesigned the Accord. This popular midsize sedan received a new look, a new hybrid powertrain, and a few new tech features. It’s also more fuel efficient. However, Honda raised the price of the Accord as well. So, how much does a fully loaded one cost now?

Let’s cut to the chase, the 2023 Honda Accord Touring is the highest trim level you can choose, and it has a starting price of $37,890 (before the destination charge). Yes, that’s a lot for a Honda Accord, and it’s only $1,000 less than the base Acura TLX. However, you do get a lot when you choose the highest Accord level.

The Accord Touring comes standard with the Google built-in feature, which includes apps like Google Assistant, Google Maps, and more on Google Play. It even comes with a three-year unlimited data plan. The Touring also comes with a customizable 6-inch head-up display, a 12.3-inch color touchscreen display, a 12-speaker Bose sound system with Bose Centerpoint technology, heated and ventilated front seats, and heated outboard rear seats.

The Touring also comes with a set of 19-inch black wheels to give it a more aggressive look.

The Accord Touring has a more powerful powertrain

In addition to those new tech features on the inside of the car, the 2023 Honda Accord Touring comes with some added tech underneath the hood. Honda beefed up the Accord Hybrid’s powertrain, starting with a 2.0-liter Atkinson-cycle four-cylinder engine. A two-motor electric system finishes off the drivetrain, and altogether, the system puts out 204 hp and 247 lb-ft of torque.

As for fuel efficiency, the 2023 Accord Touring is able to achieve up to an EPA-estimated 46 mpg in the city and 41 mpg on the highway. These numbers are reduced compared to the 2022 Honda Accord Hybrid model. However, we suspect that the large 19-inch wheels have something to do with the deficit.

The most fuel-efficient 2023 Accord model is the middle trim 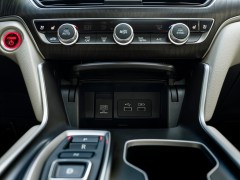 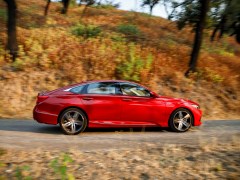 5 Things to Know About the 2023 Honda Accord Midsize Sedan

Surprisingly, if you want the most fuel-efficient Honda Accord model, you’ll need to look at the mid-trim Accord EX-L. The Honda Accord EX-L utilizes the same powertrain; however, it’s a little lighter and has smaller wheels beneath its fenders.

Those smaller and lighter bits equate to a large jump in fuel efficiency. According to the EPA, the 2023 Accord EX-L can get up to 51 mpg in the city and 44 mpg, which blows the previous iteration out of the water.

The Accord EX-L is also a little cheaper, with a starting price of $33,540 (before destination). That’s far more attainable than the higher-end Touring trim level, but if you want everything that the all-new Accord has to offer, the top trim level is the one to buy.

After all, it may have a near-luxury price tag, but it also comes with near-luxury features. Also, that Google built-in feature is a first for Honda, so the Accord Touring is a bit of a pioneer as well.