As a small truck, the Hyundai Santa Cruz lacks the off-road prowess that Ford has given the Maverick. And to some folks, that might be a bit of a disappointment. Because who doesn’t love an off-road truck? But, with the Santa Cruz, Hyundai has an opportunity to offer something truly exciting. And that is a compact pickup with legitimate performance, a Hyundai Santa Cruz N.

Will there be a Santa Cruz N?

As a sporty, small truck, a Hyundai Santa Cruz N would likely be popular, but it is unclear if Hyundai intends to build one. The brand is not shy about giving various vehicles the performance treatment. The 2023 Hyundai Kona N makes 286 horsepower and 289 pound-foot of torque.

So, if Hyundai is willing to give the N treatment to an SUV, why not do it to its small truck? It’s been rumored that Ford might make a Maverick ST. And that would certainly be cool if it did happen. A Santa Cruz N would be the same type of performance truck. Likely coming with more power, a tuned suspension, and maybe some visual upgrades.

Now, the Hyundai Tucson, which is the SUV that the Santa Cruz shares its platform with does have an N-Line trim. But, it does not add much in terms of performance. Hopefully if Hyundai does make a Santa Cruz N, it would change enough to make buying one actually worth it.

If you take a look at the current pickup truck segment, there are a fair amount of sports trucks. Ford has its Raptor, and now Ram has the TRX. And while those offerings are pretty expensive, folks do buy them.

A small performance truck would likely be cheaper, and more budget-friendly. Plus, Hyundai is creating a legacy with its N vehicles. If the brand is willing to make sporty SUVs, it just makes sense that the Santa Cruz could get the same treatment.

According to CarBuzz, there has not been confirmation by Hyundai leadership about a Santa Cruz N. But it would certainly be cool if this Korean automaker explored a performance truck.

How much would a Hyundai Santa Cruz N cost?

The 2023 Santa Cruz Limited has an MSRP of $40,320, so a Santa Cruz N would likely fall around that price. The Limited is the top-trim Santa Cruz, and an N trim would probably be place above or below it. If Hyundai decides that it wants to make one. 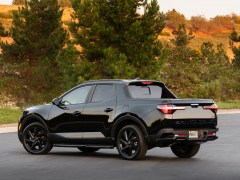 Is It Worth It to Step Up to the Santa Cruz Turbo?

In terms of powertrain, most Hyundai N models come with a turbocharged engine. The available 2.5-liter turbo engine of the current Santa Cruz makes 281 hp. That’s a fairly potent number for a vehicle of this size.

Maybe a Santa Cruz N would come with slightly more power. But there are N vehicles in Hyundai’s lineup that simply get visual changes, with no increase in power.