While BMW has not yet released any official information, Autocar speculates that it could mirror the current BMW i4 powertrain offerings. That would mean both rear and xDrive all-wheel drive options in your new electric BMW 5 Series. Rear-drive would give you 335 horsepower while the xDrive churns out 536 ponies through all four wheels. Range is expected to land near 350 miles, though there are no official testing figures as of this writing.

An early look at the 2023 BMW i5 shows similar proportions to the current 5 Series lineup. A long hood sweeps gently back to the windshield, which sits up straighter than other models. However, some differences with rear-end design are notable in the current testing photos. A longer trunk and more area behind the rear wheels make the i5 longer than the existing 5 Series. This is likely down to the packaging of the battery packs and rear-drive motors to avoid encroaching on the cabin or trunk.

The camouflage of the BMW i5 test mule means body lines are obscured, but a blocked-off kidney grille and sharper LED headlight designs are noticeable in early photos. Other notable touches include bespoke wheel designs and similar bumper cutouts to the new BMW i7 EV. 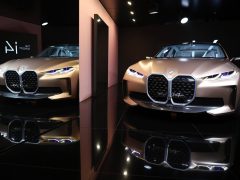 Will the BMW i4 Electric Luxury Sedan Be Enough to Satiate BMW Purists?

The future of BMW EVs

The upcoming electric BMW 5 Series will be the fourth fully-electric model in the BMW fleet. It joins the i4 along with the iX SUV and i7 executive sedan as current models. The introduction of the i5 will put an electric BMW in nearly every category, save for a three-row SUV. According to Top Electric SUV, that box will remain unchecked until 2027, though rapid EV growth may accelerate that timeline. However, trademark filings for the iX7 along with the iX6, iX8, and iX9 show BMW’s intention to go all-in on electric SUVs in their next generation. As for what’s next, an electric BMW 3 Series is in development as the BMW i3. This will likely be the next model to join the BMW electric cars available in the U.S. as a compact four-door sedan.

When will the BMW i5 go on sale in America?