Drivers know what they want regarding the Ford Maverick, but they can’t have it yet. Also, people aren’t exactly beating around the bush. Ford doesn’t have to ask, and people still share what the 2023 Ford Maverick is missing.

Is the 2023 Ford Maverick Hybrid AWD?

No, the 2023 Ford Maverick Hybrid isn’t all-wheel drive. The lack of AWD with the Maverick grinds the gears of owners and potential buyers. However, sales aren’t exactly suffering as a result.

TorqueNews decided to poll members of the Ford Maverick Club, which includes truck fans and owners, to see what is missing. The poll asked if you could change one thing about the Maverick, what would it be, and hundreds of people responded.

The most popular response involved making the Maverick Hybrid available with AWD. It’s the most popular demand. Combining the hybrid setup with AWD would provide drivers with the ability to save fuel while traversing inclement weather situations and the wild.

But keep in mind that adding AWD to the Hybrid Maverick would make it heavier and could hurt its fuel economy. It currently gets an EPA-estimated 42 mpg in the city and up to 33 mpg on the highway.

Will the 2024 Maverick Hybrid get AWD?

It’s possible that a 2024 Ford Maverick Hybrid AWD model could be in the works. While this option was expected for 2023, time is running out. Plus, the order books closed. You may have to wait til 2024 to get a Maverick either way.

Spy shots could have captured a shocking change in the pipeline. A Maverick model that’s partially covered in camouflage is believed to be a plug-in hybrid model. The Maverick PHEV AWD model is another popular option from the TorqueNews pole.

Images show a junction box attached to the rear door that reads 2.1-liter PHE-V. That could indicate a 2.1-liter engine that’s paired with a PHEV setup. Also, the base weight increased to 3,946 lbs. The gas-powered model weighs in at 3,731 lbs. That seems like a small increase.

Also, we can speculate that the truck has an independent rear suspension that sends power to each wheel.

Can the Maverick Hybrid support AWD? 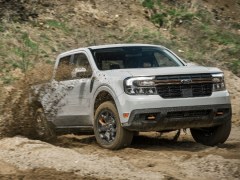 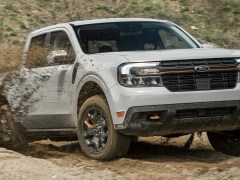 The 2023 Ford Maverick Tremor Is Weak in 1 Crucial Area

Yes, the Ford Maverick Hybrid can support AWD. It doesn’t require difficult modifications to add AWD. The Maverick Hybrid was designed with a space-saving battery to accommodate all-wheel drive.

However, the Maverick Hybrid will need more power to support the AWD system. That’s why there’s room to add another battery or switch to a PHEV setup. But here’s an odd issue to consider.

The Ford Escape PHEV isn’t available with AWD, and the Maverick is based on the Escape. Does this mean there’s a complication that critics are unaware of? Also, the Escape PHEV uses a 2.5-liter engine, so the 2.1-liter unit could provide more space.

We will keep tracking the Maverick Hybrid. Stay tuned for the latest updates. Ford might provide drivers with what they want soon.