We’ve heard about some of the cool quirks of the new Silverado EV truck, like its rear-wheel steering and its massive power the Silverado EV has a lot of quirks that you may not expect. Chevy has only released a few pictures and some of the specs of the new 2024 Silverado EV. However, in this new video, YouTuber Doug Demuro explains all about the new Chevy Silverado EV in a tour of the new truck.

Doug Demuro explains all about the new Chevy Silverado EV

In the video, Demuro takes you through a complete tour of the Silverado EV and shows off his famous quirks and features of the upcoming truck. He profiles a pre-production version, which means some of the features don’t actually work. That also means he can’t drive it.

For those that didn’t realize it, the Silverado EV is based on the Hummer EV. Like that giant truck, it’s only available as a four-door truck. Demuro reviews the top-spec version, so you can see every feature in the truck. But, Chevy is expecting the new WT, or Work Truck, model to start at about $40,000.

What are some of the quirks in the Silverado EV?

Like the old Chevy Avalanche trucks the Silverado has a midgate. In those trucks, and in the Silverado EV, you can fold the rear seats and the back of the bed, to extend the length of the bed, which could be convenient for super-long items. Overall, that means you can get a bed that’s about nine feet long. With the Multi Flex tailgate flopped down, the bed can extend to a massive 11 feet long.

Speaking of the bed, Chevy will add up to 11 outlets in the bed so you can plug in power tools. The truck doesn’t have an EV logo anywhere, either. Instead, Demuro points out, the E in the Silverado is specially styled. One thing that many truck owners will rejoice over is that the truck has dials, not buttons on the screen, to adjust the radio volume and the climate controls.

The Silverado has a frunk, and there’s an automatic opener for the frunk on the dash. And, truck owners should also rejoice that there’s hidden storage underneath the rear seats. Why don’t other manufacturers do this? But, it has a traditional column-mounted shifter, just like your dad’s old Buick.

When can you get the Silverado EV?

Chevy is taking reservations now for the Silverado EV, and the trucks will become available in the fall of 2023. That’s a long time to wait for a new truck, for sure. Reservations are refundable, but you’ll still have to wait for Chevy to contact you to firm you order, which means you can only then pick your color, trim, and find out your delivery date. Interestingly, Chevy also says that when the company contacts you, you’ll find out other details like the model year, which presumably means that you could be waiting for a 2025 truck.

However, it may be worth the wait. The Fast Lane Truck reports that Chevy now says it can tow up to 20,000 pounds when equipped.

How much does the electric Silverado cost? 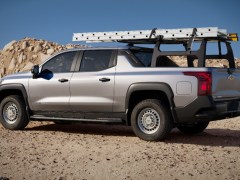 Why You Should Consider Ford and Chevy’s Electric Work Trucks

The very base mode, the WT version, starts at $39,900. That price matched the competing Ford F-150 Lighting’s base price when that truck came out, but Ford has since hiked the price up. Chevy promises that you can order the truck in several trim levels from $50,000, to $80,000, depending on the battery and the features you want. The midgate, a panoramic roof, four-wheel steering, and other options are extra on the RST, which can cost nearly $100,000 fully optioned.