Drivers that live in a harsh winter climate understand the difficulties of starting a car in cold weather. I’m from snowy and cold Wisconsin. And for a car I have parked outside the garage, getting it started in subzero temperatures can be challenging. One of the most hotly debated automotive topics is whether you should warm up a car before driving in the winter. According to the Washington Post, you shouldn’t do it.

Warming up a car before driving in the winter is unnecessary and wastes fuel, according to Washington Post

The topic of warming up a car before driving in the winter often elicits a heated response from readers. A considerable number of drivers staunchly believe that idling a car in cold weather is a good thing to do. They say that in the winter, it’s best to idle the car for several minutes or longer before driving. Also, with a remote engine start function in many modern cars, it’s easier than ever to start your car from the comfort of your home.

However, according to the Washington Post, warming up your car before driving in the winter is unnecessary. Plus, it’s harmful to do. The Washington Post discusses the multiple harmful effects of idling your car for too long. However, it primarily focuses on how it needlessly wastes fuel and pollutes the air (for gas-powered cars).

To hammer home the point about poor fuel economy from idling, the Washington Post cites the Department of Energy. It states: “Avoid idling. Think about it — idling gets you 0 miles per gallon. The best way to warm up a vehicle is to drive it. No more than 30 seconds of idling on winter days is needed. Anything more simply wastes fuel and increases emissions.”

The impetus behind the Washington Post article is how warming up a car in cold weather is an “energy myth.” Many drivers mistakenly believe that idling a car helps improve fuel economy. This notion liken stems from gas mileage typically being lower in cold weather. However, idling a vehicle worsens the overall fuel economy. In addition, it pollutes the air and increases carbon emissions for gas-powered vehicles.

The Washington Post also referenced a statement from the Environmental Protection Agency (EPA): “When a car idles for more than 30 seconds, it has several negative effects, such as increasing air pollution unnecessarily, wasting fuel, and money.”

Furthermore, warming up a car before driving in the winter is damaging to the vehicle. Not only does the Washington Post assert this, but also the EPA, automotive manufacturers, and most automotive experts.

Per the EPA, idling for too long damages a car’s engine parts and causes excessive wear. This includes damage and wear to the spark plugs, cylinders, and exhaust system. In its statement, the EPA states: “Contrary to popular belief, idling isn’t an effective way to warm up most car engines. Today’s automobile manufacturers recommend driving off right away and urge that drivers wait no more than 30 seconds to begin driving, even on the coldest days.”

The general consensus is warming up a car in cold weather for a brief time is OK, but if done for too long, it’s harmful. In cold weather, engine oil and other fluids become thick and sludgy. However, for modern cars, 30 seconds is enough to make the engine oil and other fluids more viscous, enabling a car to run effectively. As far as warming up the cabin, it will warm up much more quickly once you start driving.

What about warming up a car to defrost ice from the windshield? 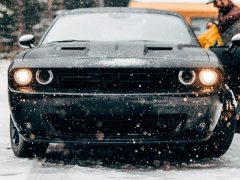 Warm up Car in Cold Weather With Engine Heater: Better Than Idling!

Some drivers argue that they warm up their car to defrost ice from the windshield. However, the harmful effects of idling your car for too long far outweigh the convenience of not having to go outside in the cold for a few minutes to scrape off the ice. Again, I’m from cold and snowy Wisconsin, so I’m sympathetic to this concern.

However, unless there’s an extremely cold windchill or a severe snowstorm (in which you probably should avoid driving regardless), going outside to scrape off the ice is just a brief period of discomfort. Plus, in the long run, the fresh air and vitamin D from the sun is good for your health.

Many people will continue to staunchly hold on to their view of warming up a car before driving in the winter. However, as asserted by the Washington Post, EPA, Department of Energy, automakers, and most automotive experts, idling a vehicle in cold weather is unnecessary — and harmful if done for too long. It wastes fuel, pollutes the air, and damages your car.