From the Lincoln Futura concept car to the military spec Tumbler, many Batmobiles have ranked among the most iconic movie cars of all time. And while each has been as unique a take on the Caped Crusader’s ride, not all of them have reflected the true spirit of the famous superhero. Because the 2022 Batmobile is integral to Robert Pattinson’s portrayal of Bruce Wayne, I’d argue that it’s the truest embodiment of the Dark Knight in all of cinema history.

Is the new Batmobile a Corvette?

The 2022 Batmobile features swooping fender flares reminiscent of the Corvette Sting Ray–and a bat’s wings. But in truth, Robert Pattinson’s Batman drives a modified 1969 Dodge Charger Batmobile. But his Bruce Wayne does drive a classic 1963 Corvette.

The second-generation of the Chevrolet Corvette was also called the Sting Ray because of its swooping fenders. The 1963 model is often called the “split window” because of–you guessed it–the shape of its rear window.

The second-generation Corvette actually held a Chevy small-block horsepower record for 40 years. The split windows have become an especially valuable collectors’ items. For this reason, it’s unsurprising that billionaire Bruce Wayne would drive one. But this classic muscle car reveals a bit more about this Bruce Wayne’s backstory: he’s a retired street racer.

The 2022 Batmobile was Bruce Wayne’s highly modified 1969 Dodge Charger. But with a battering ram instead of a front bumper and a flared widebody kit instead of stock fenders, it is almost unrecognizable. A teenage Bruce Wayne originally restored the car for street racing.

The prequel book to Matt Reeve’s The Batman (Before the Batman: An Original Movie Novel) reveals that Robert Pattinson’s Bruce Wayne grew up in Wayne Tower. As a teenager, he restored an old muscle car and began driving around the city at night. One night he entered a street race and got hooked.

He continued to modify and race his car until a young Riddler sabotaged a race. When Bruce Wayne protected the other racers, he found his calling. When he became a vigilante instead, he repurposed his old car to chase down bad guys.

The 2022 Batmobile in the Matt Reeves’ movie is inseparable from Robert Pattinson’s depiction of Batman. This easily makes the Patmobile one of the most important Batmobiles from any movie ever.

Is the new Batmobile a jet engine?

The 2022 Batmobile has a rear-mounted V8 engine, and when Batman stomps the gas it spits flames from its exhaust-pipe afterburner. But he fires flames while sitting still and it appears that this afterburner–unlike a jet engine–produces no thrust.

The Batman is set one year after Pattinson’s Bruce Wayne dons his crimfighting cape. By this time he has modified his Batmobile with armored hubcaps and a battering ram, though it retains his old racing bucket seat and harness. At some point, it seems he’s converted it to a rear-engine car. Perhaps this is to better balance the weight of said battering ram.

Director Matt Reeves contracted artist Ash Thorp to design the 2022 Batmobile. The director was originally inspired by the villainous car from Stephen King’s Christine and requested the Batmobile be as menacing. Along with its backstory, this direction infused the 2022 Batmobile with the true spirit of the antihero, Batman.

The filmmakers built four batmobiles built for the movie. They were all based on 1969 Dodge Chargers, though converted to rear-engine, AWD powertrains. Three featured 700-horsepower Chevy V8s. They were each purpose built for in-car filming, jumping, etc. A fourth batmobile was had a Tesla drivetrain so it could drive while the actors were delivering lines.

You can also watch the Batmobile in a car chase from the movie here:

Check out a DVD featurette on the Batmobile from The Batman in this next video:

And see the prop car used in the filming of The Batman in this final video: 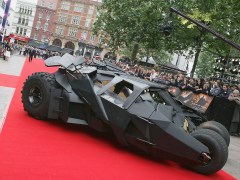 Jay Leno Drove the Batmobile Tumbler and Loved It 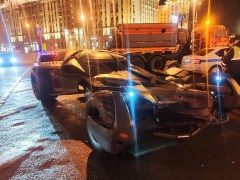 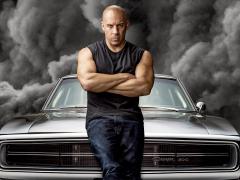