I recently installed Decked brand drawers in my Ram 1500 Rebel truck. After spending the better part of a day installing the drawers, and now with a month of service under my belt with them, I’ve come to some conclusions. These drawers are not cheap, and retail for $1,449.99, so they’re a significant purchase. But, for the kind of truck stuff I do, they make some sense.

I recently had to go over to a friend’s garage to wrench on a motorcycle. But I needed to bring my tools and some messy goodies, like carb cleaner and oil. Thinking ahead, I put my tools in the toolbox that the kit came with and tossed the oil and rags in the Decked drawers. The box is wide, and a bit awkward to carry, but it holds a lot and slots right in to the drawer. If it rattles, I can’t hear it.

The Decked toolbox held everything I needed, and locked behind the tailgate. Locking it added a lot of peace of mind while I was running errands, too. When your tailgate locks, you can’t open the drawers.

How do I used the Decked drawers?

For holding, and locking, stuff, including groceries and more, the drawers work great. Just remember to put the dividers in place or you’ll find that your frozen chicken is at the far end of the drawer in no time. The system is tall, though, and it limits how I now use the bed in my truck. For heavier stuff that I would have just tossed back there, I now need to secure I with a strap or bungee. I haven’t done a dump run with yard waste, yet, but the system will cut down on the volume of stuff I can put back there.

Overall, I’m slowly transforming my pickup into an overlander-style truck for some off-road shenanigans. I’m looking forward to using the extra capacity of the drawers for some summer camping trips. The Ram Rebel, however, has a lowish payload rating because of the air suspension, and the decked drawers weigh 200 pounds. It’s not hard to add a few hundred pounds of stuff to the truck, so I will watch to ensure I don’t overload the truck.

And, you do feel that 200 pounds in the bed during daily driving. The truck isn’t as spry as it was before, but the extra weight does seem to smooth out the ride on washboard roads.

The Decked drawers pull out about a foot beyond my Ram 1500’s tailgate. They are on rollers and slide in and out smoothly to a fixed stop. The drawers latch closed, so even if you forget to close the tailgate, your stuff won’t get tossed out at the first speed bump. Decked says they hold about 200 pounds each, but they feel like they would hold more. The metal handles have a strong, positive feel to them.

How much weight can Decked drawers hold? 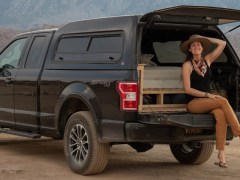 The Best Way to Measure Your Truck Bed for Accessories 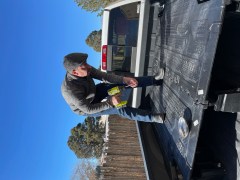 Decked says the system can hold 2,000 pounds. I believe it. But, that load would have to be spread out a bit. A motorcycle kickstand, for example, would probably punch through the top, so invest in some plywood or Decked’s Battle Mat if you want to carry heavy and pointy stuff. But, the drawers are flat and I can hop on top of them easily.

Be warned, though, it may take a while to install them. The drawers do require quite a bit of assembly.

Overall, the Decked drawers the company sent to review work better than some other systems I’ve seen, if only because they’re wider. They also lock, and slide, with ease on rollers. This summer’s camping trips should be easier thanks to these drawers.