This week, Hyundai showed off a new Ioniq 5 EV with what it calls the e-Corner system. The e-Corner could be in production as soon as 2025, according to Fox News. Instead of a traditional axle, the e-Corner system uses a hub-mounted motors like the Lordstown Endurance truck, but with steering, suspension, and other bits that allow the wheels to turn and power individually.

The advantage of e-Corner comes from each wheel providing its own power individually. It doesn’t require any mechanical connection between each wheel.

What can e-Corner do?

E-Corner allows a bunch of parlor tricks, and several useful ones. It can drive sideways, diagonally, or turn 360 degrees from the front or rear.

Zero Turn: All four wheels turn opposite of each other and the car can simply rotate, like it is on a lazy Susan.

Diagonal Driving: Why turn the car, when it can just drive diagonally? All four wheels turn in the same direction to take the car diagonally.

Crab Driving: All four wheels turn perpendicular to the car to move the car directly sideways.

Pivot turn: The rear wheels turn perpendicular and can steer the it around, pivoting at the front.

Hyundai first showed the system off in 2018.

This isn’t the first time Hyundai has shown off the four-wheel drive/four-wheel steer system in 2021, the company showed off the Mobius concept, but it was based off a concept Hyundai showed off at the 2018 Consumer Electronics Show. The Mobius concept was never designed for production, but to show off technology.

In April of 2022, Hyundai filed a patent application for four-wheel steering. The patent says that it’s for a new method and system for controlling an “in-situ rotation mode” of a four-wheel independent steering type vehicle.

What is GMC’s Crab Walk? 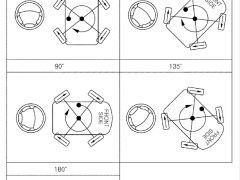 Are Hyundai and Kia Aiming to CrabWalk, Too?

Maybe you saw the Super Bowl commercial with Lebron James in the Hummer doing the CrabWalk? It shows his Hummer EV moving parallel to where it’s pointed.

According to the GMC Hummer EV’s manual, “CrabWalk Mode: Allows the driver to turn the rear wheels at the same angle as the front wheels enabling the vehicle to move diagonally. … At higher speeds the front and rear wheels will turn in the same direction. This improves stability of the vehicle during lane changes and wide turns.” Interestingly, when you enter CrabWalk Mode on the Hummer, a diagram of a crab shows up on the dash.