Trucks love to advertise their capability on their beds. It’s rare to see a truck without a TRD, HPD, 4×4, High Country, or STX badge on the bed. Chevy trucks often proudly display a Z71 badge in back. What is the Z71 package?

What is the Z71 package?

The Z71 package can turn any Silverado into an off-road capable truck. It comes with an underbody shield to protect the transfer case, oil pan and more. It also comes with hill descent control, and an off-road suspension with Rancho shocks, a two-speed transfer case, and an automatic locking rear differential. Those additions can help you go over the tall rocks on a trail, but also get through the mud and muck you’ll find on trails.

You can order a Silverado HD, too, with the Z71 package. Though it doesn’t have the Rancho shocks, it odes have beefier twin-tube shocks. It also has skid plates and hill descent control. With this package, even the biggest Silverado’s can tackle the trails with ease. It’s also the package that the police versions of Silverado’s get.

It can put the power down in the dirt better than a regular Silverado truck, however, since you also get a two-speed transfer case, which means you get an extra-low gear for off-road (or stump-pulling) work. That also means you get an automatic locking rear differential, which helps with traction in the loose stuff.  Of course, the Z71 also comes with Z71 badging on the grille, the bed, and even the floor mats, on some trucks. You can’t get the Max Trailering Package, however, with the Z71 package.

How much is the Z71 package?

The Z71 badging means your truck has some extra goodies to go off-road, but not a bigger or better engine. Instead, Z71 trucks get better springs. The standard Z71 package includes Rancho brand shocks front and rear. It also adds a heavy-duty air filter and skid plates underneath, as well as some electronic goodies, like hill descent control. The Chevy Z71 package adds about $1,700 to the base price of a new Silverado, which was first offered in the 1970s, according to AutoTrader.

What Chevy Silverados get the Z71 package 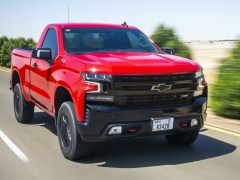 he Z71 is available for the WT, LT, RST, LTZ and High Country trim levels of the Silverado. The Z71 with the two-inch factory lift is standard on the Custom Trail Boss and LT Trail Boss. However, the LT and RST include dual-outlet exhausts with polished tips and 18-inch silver wheels. The LTZ gets larger 175/60R20 sized tires, compared to the 265-series tires on the LT and RST. On some trims, you can also get the Z71 Off-Road Protection Package, which includes a factory spray-on bed liner.

The Trail Boss or ZR2 packages are separate.

Also, since the top-of-the-line High Country already has its own special badges, someone at Chevy decided that Z71 badges were probably overkill and Chevy doesn’t include them. It’s assumed that your High Country has the upgraded suspension because it already comes with everything else. And, yes, you can get it on the two-door Silverado.