It might be hard to believe, but 70 years ago today, one of the most iconic sports cars debuted. The Chevy Corvette has been a mainstay in General Motors’ lineup since 1953, and it has been inspiring auto enthusiasts ever since it rolled off the production line. But, for 2025, something big is coming for the Corvette. And that is the fact that GM intends to build a Corvette SUV.

Is Chevy making a Corvette SUV?

Love it or hate it, Chevy does intend to introduce a Corvette SUV in 2025. The SUV will feature the Corvette logo as well as the modern styling that you would expect from the sports car. A Corvette with four doors is certainly a controversy on its own, but this is a full-blown SUV. And understandably, some folks aren’t too excited about that.

If you need some more proof that this is not your average Corvette, it is also going to be electric. According to Car and Driver, GM has plans to make the Corvette a performance-focused EV subbrand. The Corvette SUV will be one of the first that is not just a two-seater.

There’s a lot to unpack about a Corvette SUV. The Corvette name is extremely important to both Chevy and GM, and that’s because it’s been around since 1953. That’s a claim to fame that not many vehicles share.

The 2020 model marked the introduction of the C8 Corvette. And it is pretty different from Corvettes of the past due to one key feature. It is the first production model to feature mid-engine construction, meaning the engine is not placed in the front. GM hasn’t made a rear mid-engine car since the 1984 Pontiac Fiero. So, it’s definitely a big deal.

Although a Corvette SUV is bound to ruffle some feathers, I can’t blame GM for going down this road. According to Kelley Blue Book, SUVs are extremely popular. They are also very practical, especially when compared to a two-door sports car like the Corvette. So, the addition of an SUV of this kind is likely to bolster sales.

Is Chevy killing its sports car?

No, Chevy and General Motors are not planning to kill the Corvette. Chevy is just attempting to bring its iconic sports car into the modern era. And unfortunately, that does mean adding an SUV to the lineup. 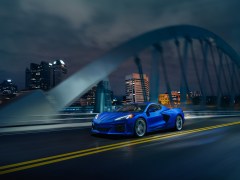 This news might come with some inspiration of what Ford has done with its Mustang. You can still buy a traditional Mustang, but the Mach-E is an electric SUV that uses the nameplate. The Mach-E does not make the normal Mustang any less of a sports car. But some may see it as diluting the brand image.

Now, this new Chevy electric SUV is not expected until 2025. And details about it are fairly limited. As we get closer to the release date, more specifics should be released. But for now, there are probably plenty of folks on Corvette forums that aren’t too stoked about it.