The Toyota Corolla is perhaps the most well-known new cheap car still for sale in 2023. But is the cheapest 2023 Toyota Corolla worth the price tag? Or should you pay a bit more for some extra features? We’ll detail what you get with the cheapest new Corolla sedan so you can decide if this is the right car for you.

Which 2023 Toyota Corolla is the Cheapest?

To get the cheapest new 2023 Toyota Corolla, choose the Corolla LE. It has a starting MSRP of $21,550 and comes with a host of standard features you may not expect.

Perhaps the best reason to choose a base 2023 Toyota Corolla is the wealth of safety features. Even in the Corolla LE, you’ll get the Toyota Safety Sense 3.0 suite of features. This includes the pre-collision system with pedestrian detection, plus lane-departure alert with steering assist. In addition, you get road sign assist and radar-assisted cruise control with full-speed dynamic range for easy highway drives. However, the true highlight is the Proactive Driving Assist, which gently brakes into upcoming curves or as you approach slower traffic if it senses you are moving too quickly. It’s a great feature for new or inexperienced drivers as they get used to different driving scenarios.

Engine and Efficiency of the Base 2023 Corolla

The 2023 Toyota Corolla uses a 2.0-liter four-cylinder engine that delivers 169 horsepower and 151 pound-feet of torque. It may not win you many drag races, but the 41 mpg highway and 32 mpg city will keep your bank account happy as you take on your week of commuting. Plus, it’s more power than you got in a base 2022 Corolla, which offered just 139 horsepower and 126 pound-feet of torque.

Standard Comfort and Tech Features of the 2023 Corolla 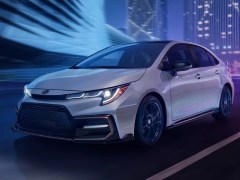 The cheapest 2023 Toyota Corolla doesn’t bathe you in luxury. That said, it isn’t as sparse as its Kia or Hyundai competition either. You’ll get a six-way adjustable driver’s seat for more comfort. Additionaly, an eight-inch touchscreen with wireless Apple CarPlay and Android Auto come in the standard model. With these wireless connectivity features, you can link your phone without carrying a cable. Enjoy voice-activated features, voice-to-text function, and even on-screen navigation as standard. Plus, features like the remote keyless entry and trunk release will make life easier.

Should You Buy the Cheapest 2023 Toyota Corolla?

For drivers that need an inexpensive and efficient new car in 2023, the cheapest 2023 Toyota Corolla makes a great choice. We’re especially impressed with the inclusion of wireless Apple CarPlay and Android Auto in this base Toyota compact. Furthermore, the depth of Toyota Safety Sense 3.0 in the base Corolla makes it an excellent choice for young drivers and those who are often in busy commutes. Plus, you get more punch and better efficiency than in the previous Corolla model, which is a nice cherry on top.