With 2023 finally here, it’s no surprise that various publications are naming their picks for the best SUV of the year. And MotorTrend and Car and Driver seem to agree on which electric SUV could be one of the best. The Hyundai Ioniq 5 is an EV that shares its platform with the Kia EV6. Since its release, it’s garnered quite a bit of praise. Does it have what it takes to be best?

The Hyundai Ioniq 5 is making waves

When you think of an electric vehicle, it’s likely that something like a Tesla comes to mind. But Hyundai is proving that you don’t have to be led by Elon Musk in order to build a good EV. In fact, the Ioniq 5 is so good that it has earned praise from both Car and Driver and MotorTrend.

The Hyundai Ioniq 5 even won our own MotorBiscuit EV of the Year award, getting praise for its engaging drive and practicality. Another perk of this electric SUV is its design. Hyundai took some bold choices with the Ioniq 5, and frankly it pays off in a big way. If you want something more subtle, there is always the Kia EV6 which rides on the same platform.

How powerful is the Ioniq 5 SUV?

In terms of power, the Hyundai Ioniq 5 comes standard with 168 horsepower. If you opt for the long-range battery with RWD, you can get 225 hp and 258 lb-ft of torque. But for the most powerful Ioniq 5, look to the AWD variant with 320 hp and 446 lb-ft of torque.

Range is also a benefit of this electric SUV. According to Car and Driver, you can get up to 303 miles of range. Plus, with a DC fast charger, you can go from a 10% charge to 80% in under 20 minutes. And, a real-world test did confirm that.

Electric vehicles are likely the future of the automotive industry. More and more brands are commiting to elecrifying their lineups with the coming years. This electric SUV from Hyundai, could very well be the EV that pushes consumers to embrace the future. According to MotorTrend, the Hyundai Ioniq 5 is fun to drive. Which is not something said often about an SUV. 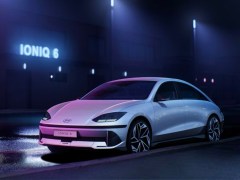 The Ioniq 5 does come with some notable drawbacks. The front trunk, or frunk, is not all that big. And, you can’t get wireless Apple CarPlay or Android Auto. Even with those cons, major publications still feel comfortable naming the Hyundai Ioniq 5 one of the best SUVs of 2023.

Can you buy this electric SUV?

Unfortunately, buying the Ioniq 5 might be easier said than done. It has a starting MSRP of around $40,000, but it is only being sold in limited quantities. That could be due to supply chain issues, or Hyundai simply not being able to keep up with demand.

Hopefully, Hyundai is able to get more Ionqi 5 models to dealerships. That way, folks get a chance to experience this electric SUV.