While the air fresheners hanging from the rearview mirror can seem like a pretty harmless car accessory, they can get you pulled over by the police in a majority of states, according to The New York Times. Many drivers are unaware of these laws and continue to hang air fresheners from their rearview mirrors. The states where you can be pulled over have laws on the books that say you can’t have anything near your windshield that could obstruct the driver’s view. It is a relatively low-level offense, similar to tinted windows or broken headlights.

According to Power Nation TV, the Minnesota law states, “A person shall not drive or operate any motor vehicle with…any objects suspended between the driver and the windshield, other than sun visors; rearview mirrors; driver feedback and safety monitoring equipment when mounted immediately behind, slightly above, or slightly below the rearview mirror.”

Minnesota is not alone in making it law that you cannot have anything between the driver and the windshield other than a GPS, registration sticker, or sun visor. Anything else that can obstruct the driver’s view is illegal.

While all air fresheners hanging down from your rearview mirror are illegal in a majority of states, certain colors of air fresheners are more likely to get you pulled over.

Air fresheners with these colors are more likely to be seen by police officers because they are generally easier to see. It is the brightly or starkly colored air fresheners that are going to get you in trouble more times than not.

Air fresheners with more muted colors, such as white, gray, and black, are less likely to get you pulled over. This is especially the case if those colors blend into your car’s interior and exterior colors. The time of day can also determine how visible your air freshener is to others. 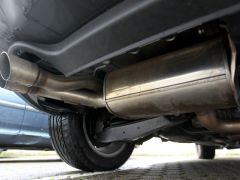 You may have heard that red cars are more likely to get pulled over and can also have higher insurance premiums. But, is this true?