Introduced in 2014, the plug-in hybrid BMW i8 was a concept ahead of its time. On sale from 2014 to 2020, this was the first BMW model to use a hybrid drive system to improve performance rather than fuel efficiency. But how does the BMW i8 compare to newer hybrid sports and luxury cars? We’ve done some digging to find out what you get with an older i8 versus the competition it inspired.

About the BMW i8 hybrid powertrain

Any used BMW i8 will use a 1.5-liter turbocharged three-cylinder engine combined with two electric motors to drive the rear wheels. At 369 horsepower and 420 pound-feet of torque, the i8 is quick, but not mind-blowing. You’ll sprint from a standstill to 60 mph in just 4.1 seconds when both propulsion systems are working together. And on its own, the electric power of the i8 can carry it up to 22 miles with a full charge.

While many modern cars come with a wealth of optional packages, the i8 makes its best stuff standard. Each i8 model comes with a heads-up display that puts information above the dash. You’ll also get a Harman/Kardon premium audio system with each used BMW i8 you find. There are some optional packages you can look for, including BMW laserlight adaptive LED headlights. You can also get an exclusive brown leather interior and blue seatbelts with the Tera World Package. However, none of these options affect the ultimate luxury and performance of the i8 lineup.

Clearly, there is no direct comparison between the 2023 McLaren Artura and the BMW model from nine years prior. However, you can make the argument that the Artura takes the i8 formula and turns up all the dials. A twin-turbo V6 mates with a battery-electric powertrain similarly to the BMW model. Plug-in hybrid performance is clearly better in the McLaren, where nearly 700 horsepower fire through all four wheels. But the BMW i8 is one model that paved the way for this modern hybrid supercar. 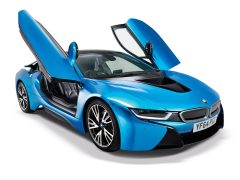 Regarding displacement and hybrid performance, a more modern comparison may be the Mercedes-AMG C63. Using just a 2.0-liter turbocharged engine and an electric motor, the latest AMG sports sedan churns out a staggering 671 horsepower. That makes the a used BMW i8 pale in comparison as we look back through the decade. But it’s a snapshot of just how far the tech has come that a low-displacement hybrid can now make nearly 700 horsepower.

The BMW i8 will go Down as a modern classic

Ushering in a generation of plug-in hybrid supercars, the BMW i8 is underappreciated in today’s world. Don’t be surprised though, if you’re browsing Bring-a-Trailer in 2040 and used BMW i8 models are fetching big money. Being ahead of your time is almost never a good thing. But as enthusiasts we can be thankful that a high-performance electrified future started taking shape before we ever knew we needed one.