We all know that when new models come out, dealers really want to get rid of their old inventory. But the days leading up to New Year’s Day are also key. Many buyers don’t want to buy a 2022 model car or SUV in 2023, so dealers are even more anxious to get rid of their old inventory before those leftover 2022s turn into shopworn leftovers. Also, most dealers aim to meet year-end goals and earn bonuses, making them more eager to deal.

In the past, the fall was the best time to buy a car. According to Forbes, the best time to go new vehicle shopping is now. Dealers are eager to beat not just that changing of the calendar but their very real quota demands at the end of the month and year. However, in years past, dealers have been flush with inventory. Not so much this year, as manufacturers have constantly been fighting supply-chain issues.

Still, one look through local car dealer ads shows several new cars sitting on lots waiting to be scooped up. Dealers had only a week’s worth of cars on the lot earlier this year, but now major dealership groups are reporting that dealers have 53-day inventories. That means that even 2023 vehicles should be available right now.

According to the St. Louis Federal Reserve, which tracks economic indicators, such as auto inventories, compared to a year ago, dealers have cars. Compared to this time last year, dealers have 110,000 more vehicles for sale. In early 2021, dealerships still had several thousand vehicles for sale, which makes us wish for a time machine. Regardless, for car buyers, the tide seems to be turning.

Also, according to the report, if you want a new minivan, you’re out of luck. The same goes for a smaller car or any hybrid, which are super popular as gas prices rise. In terms of pricing, if you want to spend less than $40,000, supply is very tight, with a 30-day supply on hand. The more expensive the vehicle, the more inventory that seems to be available. So, if you want a big, expensive SUV like a GMC Yukon Denali, no problem.

The most available truck right now is the Chevy Silverado 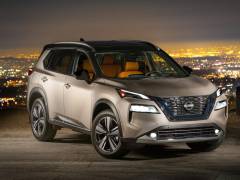 Help! I Can’t Find a New SUV for Sale.

When it comes to finding small SUVs, you’re more likely to find a new Ford Explorer, Nissan Rogue, a Ford Escape, a Mazda CX-5 or a Jeep Compass. If you want a third row, you’ll probably find a new Honda Pilot on a lot. You’re least likely to find new SUVs, including Kia Sportages, Honda Passports, the Subaru Forester or the Toyota Highlander.