From the early days of racing-inspired luxury cars to today’s track-ready sedan, BMW M3’s history is full of icons. From its roots in German touring car racing, it has retained a sense of motorsport theater for 37 years and counting. Learn more about each generation of the legendary BMW M3 and follow its advancement over the past three decades.

The first BMW M3 came only as a coupe or convertible, unlike the four-door models we see today. A 2.3-liter four-cylinder engine cranked out 192 horsepower in the first M3 models. By 1989, output had increased to 212 horsepower, accelerating to 60 mph at 6.5 seconds. Flared wheel arches, sport suspension, and upgraded brakes differentiated the first M3 from its 3-Series cousin. Today, first-generation M3 models exceed six-figure values in good condition, with low prices at around $75,000.

The follow-up to the successful E30 M3, the E36 is gaining popularity among modern enthusiasts. It’s incredibly affordable these days, with prices ranging from below $20,000 to around $40,000, depending on the condition. The E36 was the first BMW M3 in history to use a six-cylinder engine, making use of a 3.0-liter unit to deliver 240 horsepower. The First US models arrived in 1995, just before an engine upgrade ushered in the second half of the E36 generation. From 1996 through 1999, the E36 used a 3.2-liter straight-six to boost torque, while total horsepower remained the same. It could accelerate to 60 mph in 5.6 seconds, nearly one second faster than its predecessor.

The E36 was also the first generation of the M3 to get a four-door variant. The first of those models arrived in 1997.

Well-known for its appearance as the hero car in Need for Speed: Most Wanted, the E46 M3 is an icon in today’s enthusiast circles. The M-tuned 3.2-liter inline-six finally got a horsepower boost, developing 333 horsepower and dropping a half second from the sprint to 60 mph.

While the six-speed stick was the standard kit, the E46 was the first BMW M3 in history to offer an automatic transmission. The SMG drivelogic transmission was a single-clutch paddle-shifted automatic, which claimed shift times as short as .08 seconds. Today, a clean E46 M3 will go for between $25,000 and $35,000, while a few immaculate examples have exceeded $70,000 at auction.

The fourth-generation BMW M3 ushered in an era of sport-luxury cars, though it also added heft to the previously-nimble platform. This was especially true of convertible models, which saw marked drops in acceleration and handling due to the added weight. That said, to this day, it is the lone BMW M3 to sport a V8 engine, with a 4.0-liter unit making 414 horsepower. The fourth-gen M3 is also the first to use a dual-clutch automatic transmission. This seven-speed cog set improved zero to 60 mph acceleration from 5.0 seconds to 4.8 ticks. Today, if you’re looking to buy an E92 M3, set aside at least $40,000 for a quality example.

The introduction of aluminum and carbon fiber meant that the F80 M3 finally lost some heft when compared to a previous M3 generation. It is the first BMW M3 in history offered exclusively as a sedan, as the coupe and convertible models were spun off to create the M4. The V8 from the fourth-gen was scrapped for a twin-turbo six-cylinder mill producing 425 horsepower. Once again, a seven-speed dual-clutch transmission and six-speed manual were available to get your power to the ground. Acceleration to 60 with the DCT flew by in just 3.9 seconds. For 2016, a Competition variant was introduced, increasing horsepower and sharpening the suspension for more focused performance. While it isn’t challenging to find an F80 M3, you’ll want to set aside at least $50,000 for one with respectable mileage.

The newest BMW M3 has become a bit of a lightning rod, ushering in a new era of BMW design that has many enthusiasts divided. The pig snout nose is reviled as being hideous but is essential for proper airflow to the twin-turbo six-cylinder engine. It spits out a staggering 473 horsepower and 406 pound-feet of torque and is the first M3 available with all-wheel drive. Competition models up the ante even further, delivering 503 ponies and six additional pound-feet of torque. 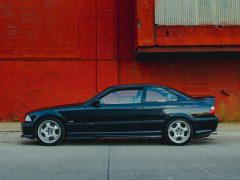 For nearly 40 years, the BMW M3 has meant the pinnacle of daily driving performance. Each generation has a legion of adoring fans. When it comes to the M3, there are no wrong answers. Even better, there are several great ways to buy into this legacy of motorsport theater, regardless of budget.