Under the hood, the latest BMW 2 Series Gran Coupe models come with one of two turbocharged four-cylidner engines. The base kit gives you 228 horsepower and 258 pound-feet of torque, while the M235i produces 301 horses. In the M235i, BMW’s xDrive all-wheel drive system is standard, but its the base model that is truly disappointing. Offered as front-wheel drive, the 228i Gran Coupe doesn’t even feel like a true BMW. Instead, it feels like an econobox with some luxury cabin upgrades. Hardly an experience befitting “The Ultimate Driving Machine”.

In the BMW 2 Series coupe, you get a more engaged, genuine BMW experience than in the Gran Coupe. This model is based on rear-wheel drive architecture, as per the BMW gospel. The base 230i uses a 2.0-liter turbo to send 255 horsepower to those back wheels. And in the new M240i, you’ll have a raucous 382 horsepower from a 3.0-liter turbocharged I6 setup. Both models are available with a rear-biased all-wheel drive system and eight-speed automatic transmission. That said, if you’re willing to go back a generation you can find 2 Series coupes with three pedals in the footwell.

So why do you care? Maybe you want the extra practicality of four doors and the styling difference doesn’t bother you. But where we take issue with the 2 Series is in the vastly different driving experience. The 2 Series Gran Coupe doesn’t have the sense of agility or engagement offered by the smaller 2. Front-wheel drive architecture means that it lacks the fundamental sportiness that underpins BMW’s legacy. And without that, you’re spending upwards of $40,000 for a front-wheel drive compact with less power than a new GTI hatch.

Meanwhile, the rear-wheel drive handling of the two-door 2 Series coupe makes the car feel alive. The front wheels only have to steer the car. Because power goes through the back, you unlock improved handling for your weekend joyrides. And if you’re buying a BMW, isn’t that what you’re after?

Why are these cars so different, despite sharing the same name? 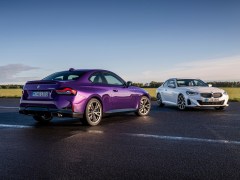 So why package both of these cars as 2 Series models? Frankly, we aren’t sure. The four-door 2 Series is sitting on similar framework to many Mini models. That’s fine for a compact hatchback or even a mid-size commuter sedan. But in a compact BMW, the entire concept feels mismatched.

Meanwhile, the 2 Series coupe is its own animal. Delivering sharp steering and satisfying punch, you get a lot of fun for your money. Nearly perfect weight distribution and 10 cubic feet of trunk space make it a great choice for both daily driving and weekend canyon blasts.