Let’s face it, none of us want to spend money on a pickup truck unnecessarily. We want something that will get the job done, get us home reliably, and one that looks good, too. That’s probably why the 2022 Honda Ridgeline is winning so many awards. Now, it can add one new one to its dashboard.

The best truck for the money

Most truck sales average about $56,000. That’s a lot of scratch for five seats and a bed. The Honda Ridgeline starts at $38,800 and is a uniquely Honda take on a pickup truck. Like the Ford Maverick and the Hyundai Santa Cruz pickups, the Honda is based on a car-like frame.

But, that doesn’t mean that it’s not a truck. It can tow 5,000 pounds and hold more than 1,500 pounds in the bed. Those are just some of the reasons that it ranks first in U.S. News and World Report’s list of Best Pickups for Your Budget.

Is a Honda Ridgeline a good purchase?

The Honda Ridgeline brings the comfort of a van or SUV since it’s based on the same platform as the Odysssey minivan and Pilot SUV. But it’s a lot more than that van. It has five comfortable seats, a clever 64-inch bed that’s longer than many full-sized trucks’ beds, and in the base model, it’s well equipped. Step up to the RTL trim for about $42,000, though, and you get a leather-trimmed interior, heated front seats, and other goodies.

Unlike big trucks from American manufacturers, it drives more like the SUV that it’s based on, gets better fuel economy, and even has a trunk in the bed. While it can’t tow as much as larger trucks, its 5,000-pound capacity is enough to tow a small trailer.

The HPD package is great for those who want to go off-road, or at least look like it, with black fender flares and distinctive HPD badging on the bed. The new $2,800 package adds bronze wheels, fender flares, and more. The base Sport model starts at $38,800 is well equipped and comes with a lot of the stuff most buyers want in a truck like Apple CarPlay and Android Auto, remote start, and an 8.0-inch touchscreen. The upgraded RTL and RTL-E trims add some niceties, like heated front seats, wireless charging, upgraded audio, and a power moonroof.

Every Honda Ridgeline comes with a 280-horsepower V6 engine with a nine-speed automatic transmission.

Is the Honda Ridgeline reliable?

The Ridgeline earns an average score for quality and reliability at J.D. Power, which tracks flaws reported by owners throughout the vehicle, but it ranked low with the Jeep Gladiator overall. At RepairPal, it earns an above-average score of 3.5 for reliability. That score ranks it 6th out of seven midsize trucks, however, that averages in all years of Ridgelines, which Honda’s made since 2006. 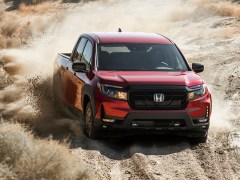 The Ford Maverick bucks the trend of ever-more-expensive, and larger, trucks. It does most of what the Ridgeline does, but its base price is an astonishing $22,195 for 2023. The Maverick became a sales hit for Ford, outselling the Ranger in 2022. The base Maverick truck comes with a hyper-efficient hybrid engine, while the upgraded truck has a 2.0-liter gas turbocharged engine, and those are some reasons U.S. News ranked it second.

You can order a Maverick in several different trim levels, from the base truck that has cloth seats and a radio, all the way up to a Lariat that is nicely appointed for around $30,000. The Maverick rounded out 2022 by earning MotorBiscuit’s Truck of the Year award.