The SUV segment is booming, and automakers have many great options for car shoppers. However, it can also be tough to decide on the best one, so it’s helpful to look at what critics say. Here’s a look at the best 2023 SUV to buy, according to U.S. News.

Why the SUV segment has become so popular lately

When car shoppers decide what car to buy, value is one of the most critical aspects they’re thinking of. This is precisely where SUVs do well, and it’s part of why SUVs have become more popular than sedans as of late. When folks look at the specs sheet of two cars, it’s immediately apparent SUVs will have more of everything compared to sedans.

SUVs usually have more cargo capacity and more power than sedans. On top of that, due to their size, SUVs also tend to be safer than sedans. The two main drawbacks with SUVs tend to be their price and their fuel economy. However, many automakers have SUVs in their lineup which can compete with sedans in both areas.

The 2023 Kia Telluride is one of the best SUV options

According to U.S. News, the Kia Telluride is the best SUV in the midsize segment for the 2023 model year, and a big reason is because of the value it offers. The Telluride starts at about $35,500, and that makes it more expensive than most sedans. However, just like in older model years, Kia gave the Telluride a lot of great features that make it worth its price tag.

Plus, for the 2023 model year, Kia gave the Telluride a refresh, so it’s even better than the last few model years. This refresh didn’t change much under the hood, as the Kia SUV is still powered by a 3.8-liter V6 that gets 291 hp. This engine is more than adequate for daily driving, and it gets a decent fuel economy of about 23 mpg combined. All-wheel drive is available, and this V6 allows the Kia SUV to tow up to 5,000 pounds of cargo.

This refresh spruced up the Telluride’s interior, which was already the SUV’s strong suit. The Telluride has three-rows as standard, and this allows it to seat up to eight people. Its interior is “premium” despite its affordable price tag, and the seats are spacious and comfortable across all three rows.

In terms of tech features, Kia gave the Telluride a 12.3-inch touch screen as standard, and Kia offers a 12.3-inch digital gauge cluster display as well.

The 2023 Hyundai Palisade is not that far behind 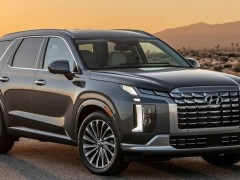 The runner-up is almost as good as the Telluride, and it’s the Hyundai Palisade. This shouldn’t be too surprising since Hyundai and Kia work closely together, and some of their cars are effectively the same. This is the case with the Palisade, as it’s almost identical to the Telluride, though it’s slightly worse, according to U.S. News.

The Palisade starts at about $35,000, and that makes it about $500 cheaper than the Telluride. Just like with the Kia, Hyundai also gave the Palisade a refresh for the 2023 model year. This refresh didn’t change the SUV’s engine, which is the same V6 that’s on the Telluride. And just like the Kia, the Palisade has three-rows of comfortable seats, as well as a high-quality interior. Their only real differences are in their styling.