The Audi R8 is lauded by many as the daily supercar, but now a new challenger has risen. The C8 Corvette moves to a mid-engine layout. This, after decades of the classic muscle car arrangement. But how does the Audi R8 vs C8 Corvette duel fare when driven daily? We’ve compared these two popular supercars to find out.

Yes, we hear you laughing. No, neither the Audi R8 nor C8 Corvette are going to be great for your cross-country move. However, they are great for enjoying the open road. So when packing for your next road trip, this Audi R8 vs C8 Corvette question is worth asking.

With a cargo area that measures just eight cubic feet, the Audi R8 presents little opportunity to pack your stuff. While two full-size suitcases is enough to pack for you and your passenger, you’ll have to hope any souvenirs fit neatly inside those bags.

Meanwhile, the C8 Corvette offers an extra 4.6 cubic feet of cargo area, so you feel free to pack for a week on the road without worrying about finding laundromats along the way.

After a rough start for the German outfit, the Audi R8 vs C8 Corvette race heats up when considering passenger comfort. The added headroom in the Audi makes it an easy choice for taller drivers. The C8 Corvette can feel a bit cramped, especially with the wide door sill and low roofline. Getting your legs into the deeply bolstered seats is a challenge as well. Meanwhile, the R8 offers a friendlier entry and exit in comparison, so your fuel and food stops fill you with less dread.

Ride quality is roughly similar in both models, though the R8’s refinement shows through when the roads really get rough. That German suspension engineering is enough to make the R8 a winner on your longer drives, though the C8 isn’t far behind. 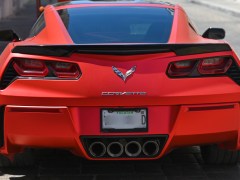 Let’s get one thing out of the way. The mid-engine Corvette is brilliant. The grip is immense, the engine punches you in the back, and immediately you understand why Chevy made the move from the front-engine layout. That said, there is just something special about the Audi R8. With the V10 engine singing its sonorous song behind you, there are moments in the R8 that transcend time. You could be on a drive to the office or a cross-country road trip, and the howl of that V10 would plant a smile on your face with the smallest provocation of the throttle.

By the numbers, the R8 V10 spits out just 562 horsepower compared to the Corvette’s 670 ponies. But they’re damn-near equal on torque, which is where all the fun is had with the loud pedal. It’s worth the gulf in ultimate power for the sensation and specialness that comes with this V10 engine. And these days, it is the last of a dying breed.

The Audi R8 is the Undefeated Daily Driving Supercar Champion

This isn’t a definitive answer to which car is better. The Audi R8 vs C8 Corvette argument comes down to what you expect. If it’s raw performance you want, the Corvette has the edge. But if it’s that special fizz of driving a true supercar everyday you’re after, stick with the Germans. For now.