Luxury cars tend to be dominated by automakers from Europe or Japan, as American luxury brands don’t usually do well against the likes of BMW or Lexus. That said, American luxury cars did well for the 2023 model year, especially for the large luxury SUV segment. Here’s a look at how American brands beat their German rivals in the large luxury SUV segment for the 2023 model year.

The 2023 Lincoln Navigator and the Cadillac Escalade ranked highly

As U.S. News argues, American luxury large SUVs currently dominate the segment, with the Lincoln Navigator in first place and the Cadillac Escalade tied for second with the Land Rover Range Rover. The car critic gave the Navigator an overall score of 8.8 out of 10, while the Escalade scored 8.5 out of 10.

Why U.S. News gave the Navigator and Escalade great scores

When car shoppers buy a large luxury SUV, they’re likely expecting a luxurious interior packed with features and a large amount of cargo capacity. That’s precisely what both American luxury SUVs offer. The Navigator starts with a 13.2-inch touch screen, while the Escalade has 38 inches of screens split between three smaller screens.

Both have three rows of seats that are spacious and comfortable. Plus, when the rear seats are folded down, the Navigator gets a max cargo capacity of 103 cu. ft. Lincoln also offers a larger Navigator that can get up to 120 cu. ft. of cargo space. The Caddy, meanwhile, has 121 cu. ft. of space is standard, and a larger option can get 142 cu. ft. As such, both SUVs have a massive amount of cargo capacity for the segment. Lastly, both SUVs drive well.

The Lincoln has a 3.5-liter twin-turbo V6 that gets 440 hp, and it’s efficient for its output, as it gets about 20 mpg combined. That said, the Navigator’s small problem has to do with its steering feeling “numb.” 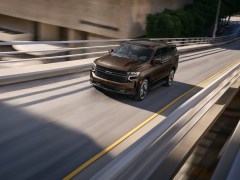 Are Full-Sized SUVs Going Extinct? Not These 6 With New Tech for 2023

Thanks to that strong balance of features and specs, U.S. News ranked the Cadillac Escalade and Lincoln Navigator above German luxury SUVs such as the BMW X7 and the Mercedes-Benz GLS. Both the X7 and the GLS have an overall score of 8.3 out of 10, which shows that they’re not bad large luxury SUVs by any means. It’s just that they have slightly more issues than the Lincoln or the Caddy does.