Certain items in the motoring world are undeniably cool. Manual sports cars: cool. Airplanes: cool. Even though these two examples, in my opinion, are undeniably cool, there will inevitably be someone who disagrees. However, I’ve yet to meet anyone who saw an Airstream camper slip down the road in a polished-aluminum streak and not dig it. If that person does exist, I don’t care to meet them. The problem with Airstreams isn’t people digging them; it’s the notion that they are prohibitively expensive for many of us. So, how much does an Airstream camper cost?

How many Airstream models are there?

Like many things in the automotive industry, Airstream has a pretty wide range of models and, as such, pricing. According to MotorTrend, Airstream makes nine camper trailers and six touring coaches. Although we often only think of the Jet-age-looking aluminum camper trailers, Airstream also makes some camper vans. Two of the more popular van models are the 2023 Airstream Atlas Touring Coach starting at $289,911, and the 2023 Airstream Rangeline Touring Coach, at $147,570. This is frankly not what we come to Airstream for, so let’s focus on the real brand pillars.

What is the most popular Airstream?

MotorTrend notes the “Silver Bullet,” or as Airstream calls it, the Flying Cloud, as the most recognizable camper. The 2023 Flying Cloud starts at $115,500.

This two-axel trailer is 27 feet long and sleeps up to six. This is the most family-friendly model because it sleeps enough people without being an overwhelming trailer to tow. Its popularity also likely comes from this model having more floor plans than any other model.

What is the least expensive Airstream trailer?

Look, there is no such thing as a cheap Airstream. However, the Basecamp is the brand’s cheapest camper, clocking in a $46,000. The Basecamp 16 measures only 16 feet and rocks a single axle making it easier to tow. Although the Basecamp is small compared to some of the others, it still comes with a bathroom. The Basecamp 16 only sleeps two people, but there is also a 20ft model that sleeps four. Of course, that upgrade will cost a few more cabbages; $54,400 cabbages to be exact.

What is the most expensive Airstream trailer? 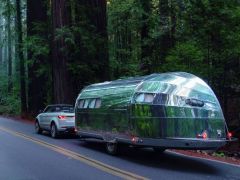 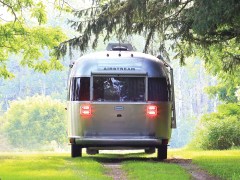 Airstream May Look Retro But That’s Only a Disguise

The 2023 Airstream Classic trailer starts at an eye-watering $188,100. Take a minute to catch your breath. That is the cost of some houses. This model stretches up to a colossal 33 feet, although the standard model is only 30 feet.