Turbochargers are now coming into their own for performance compact SUVs. They’re a great addition because they make big engine power from a small engine. Generally, a turbo can help you go faster, yet they also help save some gas, and what’s not to like about that? These turbocharged SUVs forego hybrid or EV boosters to make more juice and instead stick with old-school forced-air turbos to make big power, and big smiles.

In Subaru land, the XT versions get fans hearts pumping. Subaru Outbacks go just fine with the regular engine but drop in the 2.4-liter turbocharged engine from the beloved WRX, and they’re suddenly comparative rockets. The XT versions drop the 0 to 60 time by about two seconds, thanks to the improved torque. In this case, the turbo gets worse mileage, but it can tow more than the base car. The one big hiccup is that it costs a lot more, about $5,000 trim-to-trim, just to add the extra horses.

The Mazda CX5’s turbo adds 69 horsepower to this SUV

Mazda’s CX-5 is already Mazda’s best-selling SUV. The addition of Mazda’s turbocharged engine that adds 69 horsepower only makes it better in our eyes. This SUV, with standard all-wheel drive, is known for its sporty handling and its roomy interior. The CX-5 starts at about $27,000, but the SKYACTIV-G 2.5-liter Dynamic Pressure Turbo, with 256 horsepower, is a big upgrade with a base price of $36,850.

BMW X3 lives up to its sporting pretenses

Like many of the others on this list, BMW is turning to turbos to boost the power, yet keep fuel consumption low. The new 2.0-liter BMW TwinPower Turbo makes a healthy 248 horsepower and the M Sport appearance package helps it maximize its sporting potential. Sure, the new BMW M3 has a giant grille, a smallish cargo hatch, and a steep price, starting at about $43,000. But not many compact SUVs can match this runabout for sporty driving. Look out for the hugely fun M40i package that packs 382 horsepower, according to Car and Driver.

The turbo in the Audi Q3 45 packs a punch

You can order the Audi Q3 with not one but two different 2.0-liter turbocharged engines, the base 40 gets a 184-horsepower engine with the upgraded 45-trim gets 228 horsepower. The Q3 comes standard with all-wheel drive and an interior that’s hard to beat for about $36,000. While it may not be as roomy as some others on this list, it has the looks of the much more expensive Q8 that give it a presence others can’t touch.

The GV70 is the new turbo SUV to beat

Genesis is leaning on turbos to make its SUVs hot. The new GV70, for example, offers two different engines with turbos that promise big power, including a 300-horsepower 2.5-liter turbocharged four-cylinder or a 375-horsepower 3.5-liter twin-turbo V6. The GV70 was all new in 2022, and even won MotorTrend’s SUV of the year award. Even though it makes fun-to-drive big power at a bargain price, it’s just not quite as quick as the hottest version of BMWs, Audis or Mercedes compact SUVs.

Turbos add some oomph to the Lincoln Corsair SUV’s luxury 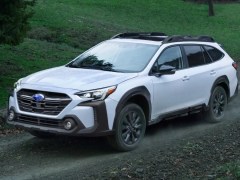 Is the Turbo Outback XT Worth It Compared to the Non-Turbo Version?

Most people don’t put the Lincoln Corsair in the same class as, say, the Q3 or the X3, but the turbo motor in the Corsair’s 2.0-liter puts out a stout 250 horsepower. It’s an understated SUV that makes a surprising amount of power. Sure, the Corsair is based on the pedestrian Ford Escape, but that means it gets all of the Ford SUVs good stuff, except covered in leather and wood on the inside. Lincoln’s soft-touch interiors are not to everyone’s taste, but to those who like to blast down the highway while being coddled, it’s the one to buy.