Despite being one of the older models in the Toyota RAV4 class, the Chevrolet Equinox still offers many features for its relatively low price tag. With a starting MSRP of $26,600, it offers a standard 1.5L turbo four-cylinder with an impressive 175 horsepower and 203 lb-ft of torque. Not as powerful as the Toyota RAV4’s 203 hp 2.5L four-cylinder engine, but enough to tow a maximum of 3,500 lbs. Seating and cargo are just as plentiful, with enough room for five passengers and up to 63.9 cubic feet of cargo space.

The Kia Sportage is an excellent Toyota RAV4 alternative when the price is a concern. It starts at just $25,900 and provides more than enough features for the price. Its base 2.5L four-cylinder engine produces 187 hp and 175 lb-ft of torque—slightly lower than the Toyota RAV4’s engine—but offers plenty of power for highway and city driving. The Kia Sportage also provides a maximum towing capacity of 2,500 lbs. Seating is just as comfortable, with room for five passengers and up to 60 cubic feet of cargo space.

The Mazda CX-5 is another Toyota RAV4 alternative that stands out for its attractive features and upscale interiors. Although the base model starts at $26,700, the CX-5 provides a substantial amount of power with its 187 hp 2.5L four-cylinder engine and up to 250 lb-ft of torque. However, a turbocharged 2.5L four-cylinder engine is also available and produces 250 hp, an impressive figure that outmatches the Toyota RAV4’s power output. The SUV also offers exceptional seating and cargo space, with enough for five passengers and up to 59.3 cubic feet of cargo space.

The new Nissan Rogue was last redesigned for the 2020 model year and provides a smart Toyota RAV4 alternative with an affordable starting MSRP of $27,360. All Nissan Rogue models come with a turbocharged 1.5L DOHC 12-valve Variable Compression Turbo 3-cylinder engine that provides up to 201 hp at 5,600 rpm and up to 225 lb-ft of torque. The roomy interior offers comfortable seating for five passengers and up to 74.1 cubic feet of cargo space—much more than Toyota’s RAV4. It offers a maximum towing capacity of 3,500 lbs.

When Toyota RAV4 and Honda CR-V seem overpriced relative to what they offer, the Subaru Forester might be a more attractive alternative. Starting at $26,395, it provides a 2.5L four-cylinder engine with 182 hp and 176 lb-ft of torque, slightly lower than the Toyota RAV4’s engine but still more than enough for highway and city driving. It also offers a maximum towing capacity of 1,500 lbs and provides roomy seating for five passengers with up to 74.2 cubic feet of cargo space. Despite its lower power output, the Forester delivers excellent fuel economy with 26 city mpg and 33 highway mpg ratings. 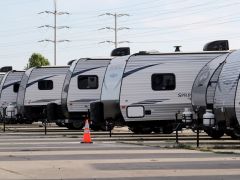 Why California Is Struggling to Keep up With Its RV Ban

The Volkswagen Tiguan is another Toyota RAV4 alternative that stands out for its impressive performance. It comes with a 2.0L turbocharged four-cylinder engine that produces up to 184 hp and 221 lb-ft of torque, more than the Toyota RAV4’s output. According to Edmunds, expect a lower maintenance cost from the Tiguan and an impressive fuel economy of 26 city mpg and 30 highway mpg ratings—slightly lower than Toyota RAV4’s numbers. The interior offers comfortable seating for five passengers, with up to 73.4 cubic feet of cargo space. It also provides a maximum towing capacity of 1,500 lbs.

The Toyota RAV4 is an excellent choice for a well-rounded and capable compact SUV. Still, there are plenty of alternatives out there if drivers are looking for something that’s more powerful or offers better fuel economy. From the Chevy Equinox to the Volkswagen Tiguan, these Toyota RAV4 alternatives provide plenty of options for drivers to consider. No matter which Toyota RAV4 alternative you choose, all of them are great options for anyone interested in a reliable and capable compact SUV.