The SUV segment is one of the most popular segments on the market, and automakers have SUVs in every price range. That being said, many shoppers are on a budget and can’t afford to buy an expensive SUV, but the good news is that there are plenty of affordable SUVs. Here’s a look at the six cheapest SUVs to consider when shopping on a budget.

Car shoppers are buying a lot of SUVs right now, and there are many reasons for that. Off the bat, SUVs tend to be safer than sedans and have more cargo capacity. Furthermore, car shoppers can find SUVs that do well in both areas while still being competitive with sedans in terms of pricing.

According to TrueCar, the Chevy Trailblazer is one of the most affordable SUVs on the market right now, and it starts at about $23,400. Like many other cheap SUVs, the Trailblazer is on the small side, but it has a lot of cargo capacity for its class. With its seats folded down, drivers get access to 54.4 cu-ft of cargo capacity. That said, its engines aren’t great, as it’s a 1.3-liter turbo three-cylinder that gets 137 hp in the standard configuration.

The Ford EcoSport is another cheap and small SUV, and it’s slightly cheaper than the Chevy as this Ford SUV starts at about $23,300. Despite being so small, it only gets about 25 mpg combined. Ford gave the EcoSport all-wheel drive as standard, which helps explain the EcoSport’s lackluster fuel economy. Unfortunately, though, Ford discontinued the EcoSport in the 2022 model year.

The Hyundai Kona is a great SUV that isn’t discontinued and starts at about $23,200. Like the Trailblazer and the EcoSport, the Kona is also small, which can be an issue if owners want a lot of passenger volume. However, the Kona has many standard features, and TrueCar praised its optional engines. The Kona can be equipped with a turbocharged four-cylinder engine that gets 276 hp. 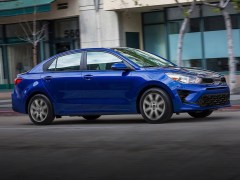 The Nissan Kicks is a subcompact SUV that starts at about $21,500 and provides great value for its price. It’s not a perfect SUV by any means, as Nissan doesn’t offer all-wheel drive, and since it’s a subcompact SUV, it doesn’t have a lot of room. That said, it has an excellent fuel economy of 33 mpg combined, and with its second-row seats folded down, it gets 53.1 cu-ft of cargo space, which is solid for the segment.

1. 2023 Hyundai Venue is one of the cheapest SUV options

The best SUV on a budget right now is the Hyundai Venue, which starts at about $20,800. Like many other small and affordable SUVs, the Venue isn’t fun to drive. However, its 1.6-liter four-cylinder engine gives it a strong fuel economy of 31 mpg combined, and Hyundai also gave the Venue a lot of features for the price. In particular, TrueCar praised the Venue’s infotainment system as it has an 8-inch touch screen as standard.